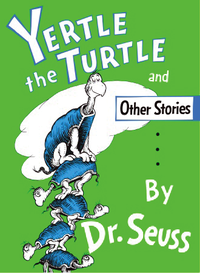 More than a year after a quote from the Dr. Seuss classic Yertle the Turtle was banned from classrooms in Prince Rupert, British Columbia, a settlement has been reached allowing teachers to bring Yertle back to school.

The ban arose in April 2012 during a labor dispute. Teachers had previously gone on strike over “issues including wages, classroom conditions and the province’s response to a court ruling last year that found previous education legislation was unconstitutional,” but they were forced back to work by hastily passed provincial legislation. To continue their protest, many teachers displayed bumper stickers or wore t-shirts with quotes they found relevant. One of these was from Yertle the Turtle:

The Prince Rupert School District deemed the quote to be “political messaging” and said it should not be displayed in classrooms or on teachers’ cars parked on school property. The British Columbia Teachers’ Federation filed a freedom of expression grievance against the provincial Public School Employers’ Association, and last month it was finally decided that the teachers do in fact have the right to “display or wear union posters, buttons and T-shirts.”

That particular labor dispute was resolved in June 2012, long before the freedom of expression settlement was reached. In January of this year, however, the Prince Rupert district again banned three teachers from wearing black t-shirts printed with the freedom of expression clause from the Canadian Charter of Rights and Freedoms. The decision on the Yertle quote likely means that those shirts will once again be allowed as well.