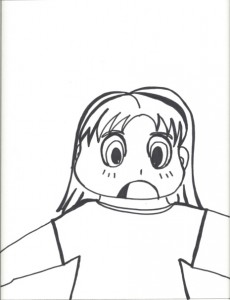 Recently, an article from Lafourche Parish, Louisiana, caught our eye: During Banned Books Week earlier this year, the local public library used a grant from the Judith F. Krug Memorial Fund to run a three-day comic book workshop for teens. The six young participants planned, wrote, and illustrated their own comic called Knowledge Deleted_, which warns about the dangers of censorship and envisions how boring and desolate libraries would be if every controversial book were actually banned. We reached out to the Lafourche Parish Public Library’s Kristen Angelette, who facilitated the workshop at the Lockport Branch, and she provided us with this guest post. Thanks to Kristen and the enthusiastic comic auteurs!

What if every banned book was banned everywhere?

The Lockport Public Library Branch put this question to a group of teenagers who attended a three-day comic drawing workshop held in August. The event, part of our Banned Books Week celebration, was held thanks to a grant from the Judith Krug Memorial Fund for Banned Books Week. The attendees learned the basics of comic drawing, layout, and scripting.

But first we had to teach them about banned/challenged books. Not because they didn’t know about censoring, but because they couldn’t believe people still tried to ban books. They were particularly eager to learn about the banning attempts against children’s works of authors like Maurice Sendak and Dr. Seuss. They seemed to be under the impression that if a lot of people considered these books award winning classics, they were above reproach.

They were also amused. Maybe I should have worried when they couldn’t stop laughing. Or when I remembered that most of them had attended an earlier art workshop celebrating banned books. And that I had told them they could make protest posters. They came prepared.

The six teens had also done something it seems many critics hadn’t: They read the books. They watched the movies. They listened to the music. And they drew this comic. 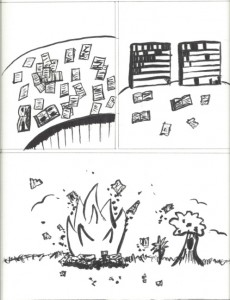 When I put the question to them of what if every banned or challenged book was removed from the library shelves, they were confused at first. Not because of the reasons given to challenge books, but the idea that someone not responsible for them could tell them what they were allowed to read. Sure, they had read things that offended them. They had read things they didn’t understand. There was even media they just didn’t like.

But that was it. No letters to the editor. No parental concerns. There was a bit of an attitude that no one would listen to the opinions of six preteen girls anyway. I was concerned. They were still laughing. So I did as any responsible librarian would, and asked them what would happen to the library then?

Oh, dear. Maybe I shouldn’t have opened that can of worms. They became hysterical. (Okay, not really. They just became very loud. People in the next room gave their quiet support; hey, we’re a library, sometimes we even keep our voices low.) If everything that could offend anyone was removed, then everything that made the library good was gone. They were inspired. I probably shouldn’t have read them quotes by famous people about censorship at that point. 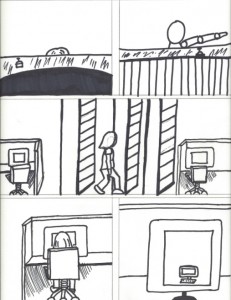 Gasp! A book could be dangerous if someone reads something they don’t like. Oh, no! And then what if someone saw something offensive on the internet? Well, it’s not like anyone would actually be using the library anymore once all the frequently banned/challenged books were gone — just put pictures of computers in place of the real ones. There’d really be no need for a librarian at this point. Or any human interaction. A plastic mannequin and an answering machine could do the job.

Of course, the main character (whose face you never see un-chibified), is the stereotypical teenager who doesn’t see what the whole thing has to do with her and doesn’t spend time in the library anyway. Please note: All the participants knew someone like this. They pitied them for not knowing what kind of awesome fun they could be having at the public library. So they decided to show their character what she was missing by first showing her what if. All that could be done then was to have her open a magical door into this reality. Books of all genres! Movies for all ages! Music, manga, magazines! Everywhere people communicating, learning, having fun!

I disavow any responsibility for what happened next. All I did was introduce the problem, give them materials, and make sure no one injured themselves on library property. I did not suggest the main character (named Brandi Banned or B. Banned for short) meet Pikachu, Scooby Doo, or the Disney Princesses. I did not tell them that if they thought the reasons behind bans were ridiculous they should respond in the most out-there ways. And I certainly did not lead them to the only conclusion: that if you want your ideas to be heard, you must fight for your Freedom to Read.

I’m completely innocent. And very proud. Some of them drew the panels. Some wrote the script. And some bounced around different ideas. In the end, they created a comic book that told their side of the story. If you have the ability to make your own decisions about what to read, listen to, or watch, then you have a responsibility to choose only for yourself. And everyone has the Freedom to Read.