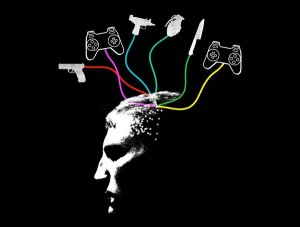 Like comic books in the past, video games have become the nation’s new whipping boy when it comes to finding something to blame for the horrific gun violence that seems to be popping up every few months. Despite loads of existing evidence showing that there is not a link between video games and violence, we saw a major push last year to re-explore that territory after the terrible events of the Sandy Hook Massacre. Obama called for $10 million to be spent on further research trying to find some sort of connection. So, it is a year later, and you’re probably wondering what happened with this proposed research.

When the nation faces tragedy involving gun violence, it seems like the only thing we can be sure of is that the media will immediately try to point a finger at violent video games such as Call of Duty or Grand Theft Auto. Not only is blaming video games an easy scapegoat, pundits still manage to convince many citizens to rally behind the cause.

After Sandy Hook, it didn’t come as much of a surprise that once again, a lot of people were going to try to blame video games for the tragedy. A month after the event, Vice President Biden met with members of the video game industry. Days after that, President Obama announced the $10 million dollar plan. Despite the lengthy process involved in such research, which could take months (if not years), one would expect to hear something a year after the announcement. But reports are showing that not only has no new research been performed, the money to perform the research hasn’t even been exchanged.

The speculation behind the delay seems to be largely political. Some experts are positing that this call for more research into the relationship between video game violence was just to pacify the media. Within hours of Sandy Hook, there was speculation everywhere from Fox News to CBS that video games were the cause of the tragedy. As the nation seemed to support this idea, the government seemed to act by trying tell the nation what it thought that people wanted to hear.

Christopher Ferguson, a psychologist and prominent video game researcher who attended the meetings with Biden says:

“The political process was driven in many ways by the media reports, and vice versa,” reasons Ferguson. “I remember after the Biden meeting, and about a month later when the White House released its plan — which all fell apart — I think I was never so popular in my life. My phone was ringing off the hook. The two forces were feeding into each other, and I think some people took it as an opportunity to promote their own agendas.”

While other reports seem to indicate that the government is actually pursuing means to fight gun control in a more direct manner, why all this posturing from the Administration? It seems that it may have been a way to district the nation. Meeting with members of the video game industry and announcing a plan to spend millions on research were ways of showing that the government was listening to the media’s concerns. At the same time, it was effectively distracting the nation from what many feel should have been the real target: the guns themselves. Ferguson explains:

“Their thought may have been to deflect any criticism that they were going after people’s guns, by also going after their video games,” he continues. “I think the intent was to say, ‘We’re not specifically going after games, we’re going after everything!’ I don’t think it was very helpful in the end. I think they ended up doing more damage than good.”

It is clear that some people in the government do realize that any connection between video games and gun violence is far too attenuated for the country to be spending millions of dollars on, and they are actually aiming to take a more direct approach. But unfortunately, taking this approach and acting like they are going to pursue research on video games is only perpetuating the media’s scapegoating. Video games have become the victim as the government wags the dog to distract the masses from finding their true agenda in combating gun violence.