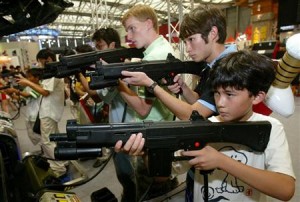 Video games, the latest scapegoat in the war against gun violence, are being faced with yet another attempt to stifle their First Amendment rights. As a result of the Sandy Hook massacre and other recent tragedies, a new act is being proposed to require more study of the alleged link between video games and violence. The Violent Content Research Act of 2013 would require the Federal Trade Commission, Federal Communications Commission, and the Department of Health and Human Services to enter into arrangements with the National Academy of Sciences to study and report causal connections between video games and real world violence.

Last month we reported that New Jersey passed a proposal that would require the Department of Education to distribute questionable research concerning the link between video games and real world violence. Now, the Senate will soon vote on the Violent Content Research Act of 2013, which will mandate more research and study despite years of prior evidence indicating that there is not a definitive relationship between video games and violent crime.

If this act is passed by both the Senate and the House of Representatives and signed into law, it would require that the FTC, FCC, HHS, and NAS research and report on the alleged causal link between video games/video programming and real world violence within 15 months. The research will explore several issues:

This pursuit of suspect research is another reminder of how the current attacks on video games is frighteningly similar to the attacks against comic books in the 1950s. Despite Supreme Court holdings such as Brown v. EMA, denial by FBI profilers, and flaws in research that links gun violence and video games, legislators still won’t accept the lack of connection between the two. They continue to press for more research in hopes that they will eventually get the answer that they want.

While this act is targeted towards video games, not comic books, this issue still hits close to home because it so closely resembles the treatment of comics in the 1950s. On CBS’ Face the Nation, Texas A&M International University psychology professor Christopher Ferguson explains:

[W]hen new media come out… they tend to go through a period of what we call moral panic, in which they are blamed for all manner of societal ills…. We may see some people sort of starting with a conclusion and trying to assemble data in a very selective way to try to support that conclusion.

Basically, Ferguson argues that research such as that mandated by the Violent Content Research Act wouldn’t represent true scientific study. Instead, the research would represent the antithesis of the scientific process by starting with a conclusion — that video games cause violence — and molding the research to support the conclusion.

The existing research and the opinions of many experts indicates that mandating additional research on the topic would be wasteful of both time and resources. Much like the arguments against comic books in the 1950s, the argument that video games cause violence is specious and any links that have purportedly been found to connect the two are extremely attenuated. Further, the bill ignores the fact that video games are constitutionally protected speech. This issue was taken up by the Supreme Court in Brown v. EMA, which established that it is unconstitutional to have laws restricting the sale or rental of “violent” video games and that state legislative bodies are not entitled to create new categories of speech that are unprotected by the Constitution. CBLDF’s amicus brief linking the current attacks against video games to the attacks on comics in the 1950s — also under the auspices of “scientific” research — was cited in the majority decision that sided with the free expression of video games.

Despite legislators’ need to point fingers in order to explain these horrible acts of violence, this bill does not seem to be the answer. Research on this topic has already been performed and concluded that there is little to no connection between interactive media and violence. The Supreme Court has already decided that video games fall under First Amendment protection. So why do some government officials feel the need to continue down the same path without regard to the money and resources that would be exhausted to churn out more unnecessary research? Pursuing other avenues would clearly be a more efficient way to take on the issue at this point.

There is a great danger to all creative outlets if video games are censored as a result of excessive biased research. What happens when video games are censored and there are still issues of violence plaguing our country? Will comic books be next? Movies? Television? Novels? Finding a new scapegoat is not only a lazy and ineffective way to solve the problem, it is a needless restriction to our freedom of speech and expression.

The Entertainment Consumers Association recently sent out an action alert which called for members to contact the Senate to voice their opinions against the Violent Content Research Act. The ECA Advocacy Director Brett Schenker articulates the ECA’s concerns by explaining:

…this move towards more research by the government is a “distraction to finding the real causes” of horrific events such as those that happened in Newtown, Connecticut, last year. The ECA also questions the motivations of Sen. Rockefeller (a long-time critic of video games and movies), who has publicly stated that he disagrees with the Supreme Court’s decision that video games are protected free speech.

By visiting the Entertainment Consumers Association website, you can view the action alert and have a letter sent on your behalf to your Congressional representative, urging him or her to not support the Violent Content Research Act.