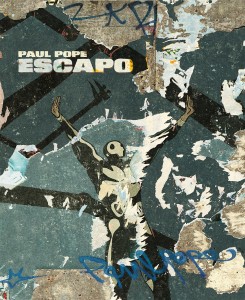 Indie artist/writer PAUL POPE is getting ready to celebrate his next project, the new edition of ESCAPO (Z2 Comics , Summer 2014).  His book preview event will be a full on mash-up of comics and music fans rockin’ out. Exclusive memorabilia by Paul Pope is being created for this event and will be for sale along with a limited amount of advance copies of ESCAPO and other Pope specialty items. A portion (10%) of the proceeds from the merchandise sale is being donated to the Comic Book Legal Defense Fund (CBLDF), a non-profit organization dedicated to the protection of the First Amendment rights of the comics art form and its community of retailers, creators, publishers, librarians, and readers. The CBLDF provides legal referrals, representation, advice, assistance, and education in furtherance of these goals. Pope is a member of CBDLF and has supported their mission in a variety of ways.

The UK dirty rock n roll band, The Jim Jones Revue known for their no-holds-bar, high energy music and performances  is described as “sounding like a car crash between Little Richard and The MC5.” They are currently touring America in support of their hit single “Collision Boogie” and its US release this month.  This one night show at Webster Hall’s Marlin room is their only NYC performance – the band is here to celebrate Paul’s ESCAPO book launch.

And…everyone attending will be in for a special treat when POPE takes the stage and DJs a set himself.

A night of music, comics art and giving back in support of protecting your First Amendment rights!

Tickets are on sale for $20; click here to purchase yours now: http://tktwb.tw/LpJUwG 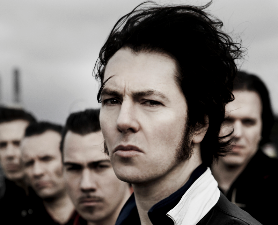 ESCAPO, originally published in B&W in 1999, has been brought back into print. Now in full color with additional content, published by Z2 Comics, coming out this summer.

Paul Pope is the acclaimed author and artist of Battling Boy, Batman: Year 100, Heavy Liquid, THB and 100%. The winner of three Eisner Awards, he is known for his high-energy artwork and action-packed, genre-bending storytelling. In addition, Pope has worked on art & design projects with fashion brands Diesel and DKNY. In 2010 Paul Pope was recognized as a Master Artist by the American Council of the Arts. Pope currently lives and works in New York City.