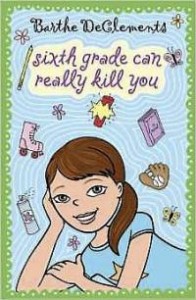 Today, a review committee in Rosemount, Minnesota will decide the fate of Barthe DeClements’s Sixth Grade Can Really Kill You, which was challenged by a district parent, who filed a complaint about language in the book. CBLDF has joined a coalition led by the National Coalition Against Censorship to defend the book.

Parent Jenna Boutain filed a complaint against the book over the use of the word “retarded,” which she considers hurtful language. Her daughter had been given the book as part of an accelerated reader program in the district. The school offered to restrict access to the book for Boutain’s children, and Boutain agreed but she filed a request to remove it from elementary school libraries in the district anyway. Christopher Magan with twincities.com shared some of Boutain’s request for removal:

“As a whole, I feel the book is outdated and uses language that is no longer acceptable,” Boutain wrote in her request. “This book serves no educational purpose besides keeping words and behaviors in the minds of our students.”

The review committee can decide to keep the book, restrict access to the book, or remove it. Removal raises First Amendment concerns because legal precedent dictates that school boards cannot remove material because some — in this case, a single parent — find it objectionable. Removal or restriction would also open the door to challenges against other books that contain politically incorrect language: Books such as The Adventures of Huckleberry Finn, To Kill A Mockingbird, The Merchant of Venice, Little House on the Prairie, and more could become vulnerable to challenges.

The entirety of the letter that CBLDF signed follows. We’ll post updates as soon as they become available.