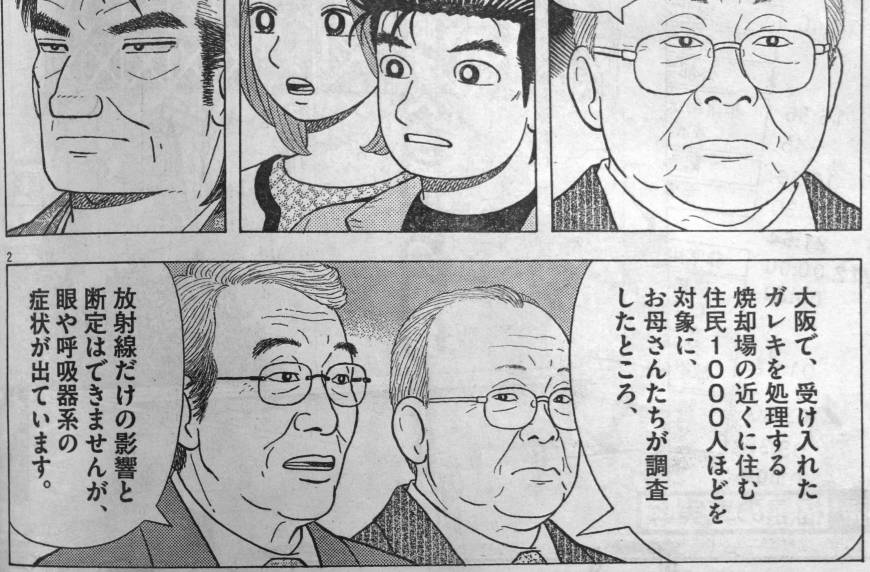 The long-running manga Oishinbo, which raised a stir in recent weeks by suggesting a link between the Fukushima nuclear meltdown and health problems suffered by area residents, has suspended publication under heavy criticism from local Japanese governments and Prime Minister Shinzo Abe.

When the controversy began after the April 28 edition of Oishinbo, which appears weekly in Big Comic Spirits magazine, the publisher Shogakukan seemed supportive of writer Tetsu Kariya’s freedom to explore the radiation issue through fiction. As criticism mounted from the local governments of Fukushima and Osaka Prefectures, Shogakukan announced that an article exploring all sides of the argument would run this week. The 10-page article did appear in this past Monday’s issue of Big Comic Spirits, but as it turned out the magazine also announced the indefinite suspension of Oishinbo, which first appeared in 1983.

In a statement, Big Comic Spirits managing editor Hiroshi Murayama stopped short of retracting the claims made by Kariya’s characters, but said he was “aware of my responsibility for the unpleasant feelings this has generated.” He announced that the magazine would “review the language used and will take on board the criticism that has been made.” Many Fukushima-area residents and government officials have expressed concern that the Oishinbo storyline could harm regional agriculture and tourism.

Kariya, meanwhile, is resolutely defending his viewpoint. “Trumpeting the safety of Fukushima may have pleased some. But deception is what I abhor most,” he said on his blog. Acknowledging that he did not expect such a strong backlash to the suggestion that radiation exposure could have caused nosebleeds and other health problems, he concluded that “I can only write the truth.”

← Today Only! Buy Your Special Edition: NYC Ticket to Benefit CBLDF!
Freedom to Read Under Attack in Schools →