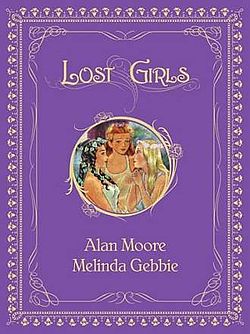 Almost a year ago, Auckland City Libraries in New Zealand declined to add Alan Moore and Melinda Gebbie’s Lost Girls to their collection, fearing prosecution under the country’s child pornography laws. The book was subsequently submitted for review by the New Zealand Office of Film & Literature Classification, which this week finally rendered a verdict: while not strictly illegal, Lost Girls is restricted to adult readers and cannot be displayed in public outside of a sealed package.

The censorship saga began when New Zealand cartoonist Dylan Horrocks requested that Auckland City Libraries purchase a copy of Lost Girls, which follows adult incarnations of childhood fairy tale heroines Dorothy Gale of The Wizard of Oz, Alice from Alice’s Adventures in Wonderland, and Wendy of Peter Pan as they reminisce over erotic memories from their (partially underage) past. Although Horrocks knew the library system to be supportive of graphic novels, the response he received was discouraging: the library would not be purchasing the book because “we have been advised by the Office of Film and Literature Classification that we may be at risk of prosecution if we made the book available to customers.”

There was one way to find out for sure if the book was illegal–submit it to the OFLC for review and rating. Although the official government censorship office applies content ratings to all movies and video games released in New Zealand, filling a role analogous to the non-governmental MPAA and ESRB in the U.S., it does not rate books unless specifically requested. Auckland City Libraries were hesitant to submit the request themselves, however, as Regional Resource Manager Louise LaHatte explained to Horrocks by email:

Auckland City Libraries did not think it was appropriate for us to submit a book for classification, with the possible outcome that it was banned. This could be interpreted as libraries trying to ban books, when our intention was to clarify our legal position.

That was the last we heard of the story until yesterday, when Horrocks mentioned on Twitter that the library had eventually decided to submit Lost Girls after all, and the book had received a rating of R18 meaning it could potentially now be purchased by libraries without fear of prosecution. We hunted down the OFLC’s decision–it’s not easily linkable, but you can find it by searching for Lost Girls here, clicking on the third result, and clicking again on “Register Page”–and found a content analysis that is surprisingly nuanced for a censorship office:

Lost Girls is a challenging work that contains problematic material. However, the book has been widely acclaimed for its literary and artistic significance, and its call for the freedom of the sexual imagination. The book has a serious purpose: author and artist intend it as “good” pornography that re-asserts pornography’s potential as art and therefore, its socio-political possibilities as an antidote to repression and violence. It is likely that most readers will experience some discomfort at images and text that appear to challenge strong social taboos. However, the publication as a whole does not promote or support, or tend to promote or support, any of the activities shown.

The book is clearly intended for adult readers. There is a consensus amongst the public of New Zealand that children and young people should not be exposed to explicit sexual material intended for adults until they reach a level of maturity and experience that would allow them to cope with such material. In particular, young readers should not be exposed to images and text that they would be likely to find extremely shocking and disturbing. The availability of ‘Lost Girls’ is therefore restricted to adults. Given how explicitly sexual the book is, the classification does not greatly interfere with the right to freedom of expression set out in the New Zealand Bill of Rights Act 1990. In light of the book’s intended adult readership, the decision is a reasonable and justified limitation on the freedom of expression.

All books rated R18 by the OFLC are required either to be displayed in a sealed (presumably opaque) package–not a good solution for a circulating library book–or to be hidden entirely from public view and only given to adults who request them. Auckland City Libraries apparently take the latter option, as the system holds several “desk copies” of American Psycho, another book that received the adults-only rating. So while it’s disappointing that Lost Girls is restricted, at least it can now join the other dangerous books on library shelves!