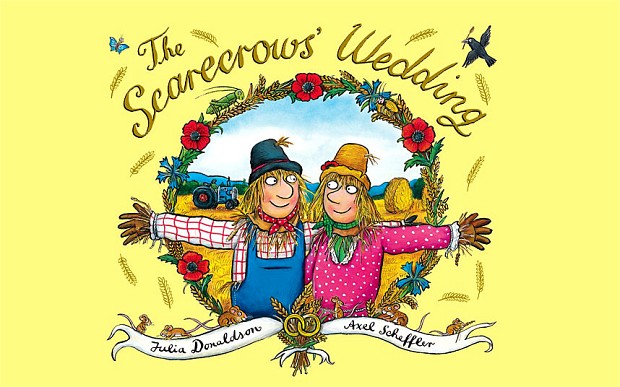 First it was Santa Claus, then Bone. Now some parents are calling for the censorship of a new book by British children’s author Julia Donaldson because it shows a scarecrow smoking a cigar.

Even though The Scarecrows’ Wedding portrays smoking as a risky behavior (especially for a scarecrow), at least one Amazon reviewer said the book “should be removed from sale.” Other parents didn’t go quite that far, but there was enough criticism that publisher Scholastic was obliged to respond. A spokesman said:

We feel that, in this case, the book really does show smoking in a completely negative light: [smoking scarecrow] Reginald Rake is quite clearly a bad character; smoking makes him cough and causes a fire, and [another character] says categorically that ‘smoking is bad for you’, and that he should be ‘feeling ashamed.’

According to the spokesman, editors at Scholastic “did debate the point at considerable length before going ahead.” But in the end, the publisher, which also happens to issue Jeff Smith’s Bone series, took a pragmatic view of the smoking in Donaldson’s book:

Our feeling, after much discussion, was that children will inevitably encounter smoking at some stage, as people continue to smoke outside in public places, and we hope that, by showing smoking in such a negative way, this book might give parents the opportunity to discuss the issue with their children, and reinforce the anti-smoking message.

Donaldson herself also dismissed the idea that her book encouraged smoking in any way, reiterating that Reginald Rake is clearly portrayed as a shady character. Although some parents have always complained about sympathetic characters smoking in children’s books and movies–in addition to those cited above, the hookah-smoking caterpillar in Alice’s Adventures in Wonderland has long been mired in controversy as well as fumes–it seems that the tide is increasingly turning even against villains who smoke.