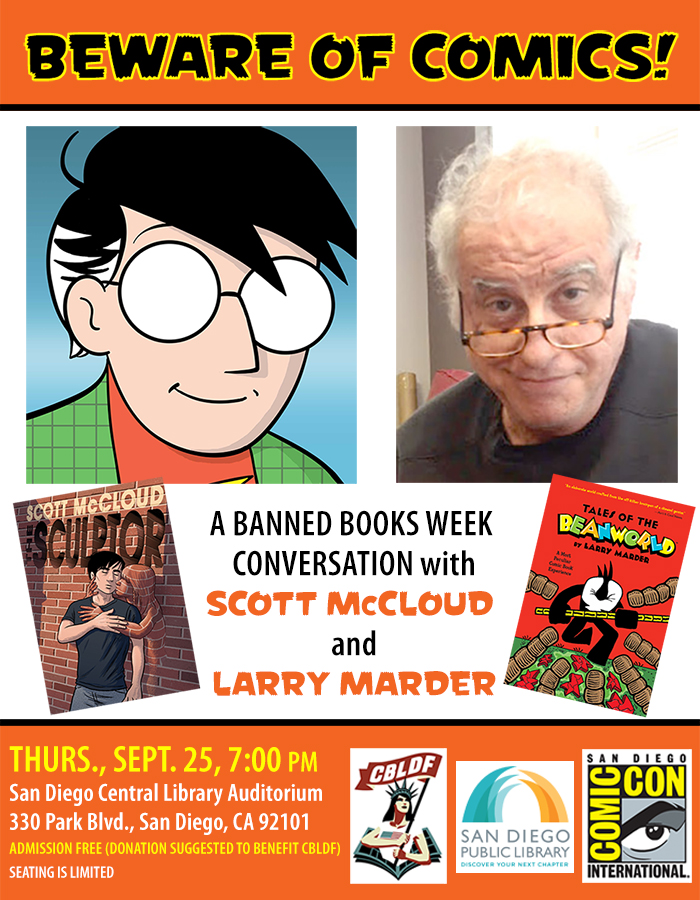 DANGER! Comics are still risky business, with contents so shocking that they’re being banned all over the United States! On Thursday, September 25, celebrate Banned Books Week at Beware of Comics! featuring Scott McCloud, acclaimed author of Understanding Comics and the long-awaited graphic novel The Sculptor, and Larry Marder, the creator of the graphic novel series Beanworld and president of the Comic Book Legal Defense Fund in a lively conversation about comics, censorship, and what makes the medium so dangerous in the 21st Century. This event is presented by the Comic Book Legal Defense Fund and Comic-Con International at 7:00 pm in the Auditorium at the San Diego Central Library, 330 Park Blvd., San Diego, CA 92101. Admission is free with a suggested donation to the CBLDF. Seating is limited.

In 2014, Banned Books Week celebrates comics and graphic novels. In recent years, acclaimed comics including Bone, Fun Home, Persepolis, and Captain Underpants have all been objects of major censorship battles. Despite the increased esteem for the medium, comics are still fighting a stigma in the public eye that goes back to the televised Senate Subcommittee hearings against comics that happened 60 years ago. Marder and McCloud, leading participants in the battle for creator rights that led to the modern graphic novel, bring their expertise on the history and language of comics to the question of why comics are still dangerous in 2014.

Scott McCloud is the award-winning author of Understanding Comics, Making Comics, Zot!, and many other fiction and non-fiction comics spanning 30 years. He started the international 24-Hour Comics phenomenon and his comics are available in 18 languages in print and online at scottmccloud.com. McCloud’s upcoming graphic novel The Sculptor will be available in February 2015.

Larry Marder‘s Beanworld has delighted readers from grade school to grad school for more than a generation, earning him a spot on the New York Times’ Graphic Books bestsellers list. On the business side, Marder has been executive director of Image Comics, president of McFarlane Toys, and marketing director of Moondog’s, a chain of Chicagoland comic book stores. Marder currently serves as president of the Board of Comic Book Legal Defense Fund.

Comic Book Legal Defense Fund is a non-profit organization dedicated to protecting the First Amendment rights of the comics medium. Our work takes us into courtrooms, classrooms, conventions and libraries all over the United States where we provide legal aid, education, and advocacy to protect the First Amendment rights of the readers, creators, retailers, publishers, and librarians of comics, manga, and graphic novels. Visit us at cbldf.org.

Comic-Con International: San Diego is a nonprofit educational corporation dedicated to creating awareness of, and appreciation for, comics and related popular artforms, primarily through the presentation of conventions and events that celebrate the historic and ongoing contribution of comics to art and culture. Visit us at www.comic-con.org.