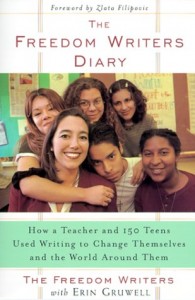 The Parkway Local School District in northwest Ohio last week formed a committee to consider a challenge to the collaborative memoir The Freedom Writers Diary after the father of a high school freshman asked that it be banned from classrooms. Although the district is following its review policy regarding challenges, the book is currently suspended from the curriculum until the committee makes its recommendation to the school board.

Ninth-grade English teacher Jessica Rolfes, in her first year with the district, assigned the book with the approval of principal Brian Fortkamp. Rolfes sent a letter to parents notifying them that the book references “abortion, oral sex, racial slurs, mild mention of drugs and some moderate profanity,” allowing them the opportunity to opt out of the assignment as outlined in district policy 2240 on “Controversial Issues.” But parent Jeff Armstrong instead requested at an October school board meeting that the book be banned for all students.

Fortkamp told the Daily Standard newspaper that he read and enjoyed the book, finding it highly relevant to students’ lives. He carefully made clear, however, that the recommendation on its use in the curriculum must come from the review committee and not from him. For his part, Armstrong also said that he read the book “line by line, cover to cover” and will abide by the school board’s decision with input from the review committee.

The Freedom Writers Diary, a collection of diary entries by real high school students, has faced challenges at other schools in the past. In 2008 the book was banned from 11th grade classrooms at Perry Meridian High School in Indianapolis while students were reading it, and their teacher Connie Heermann was suspended for 18 months without pay. In 2007 it was challenged in Howell, Michigan, but the school board eventually voted 5-2 to retain it.