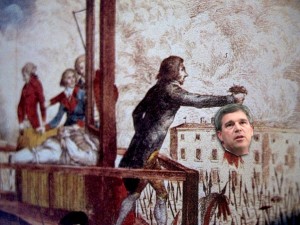 In decrying an illustration for being “violent & wrong” on Twitter — and tagging local authorities on the tweet — a University of Michigan adjunct professor has both endorsed censorship and overshadowed a bigger issue: the debate about the safety of college football players.

On September 28, University of Michigan quarterback Shane Morris took a brutal hit during a game against Minnesota, and despite injuries, was put back into the game. According to a statement later released by Athletic Director Dave Brandon, Morris suffered a “probable, mild concussion.” Two days later, hundreds of Michigan students gathered on campus to protest what they believed to be a mishandling of a situation by the university’s Athletic Department and especially its head, Dave Brandon. University President Mark Schlissel also announced that the Athletic Department’s safety procedures would be reexamined.

But what most struck Derek Draplin, editor of the conservative campus newspaper, The Michigan Review, was the “mob mentality” of the student protestors, as they marched to President Schlissel’s home, some holding signs calling out the Athletic Department and some chanting, “Fire Brandon.” In response, The Michigan Review posted an article about the protest and put together an image to accompany it. The image in question superimposed a poorly cropped image of Brandon’s head over an unlucky victim of the French Revolution-era guillotine, leaving Brandon’s head hanging over a bloodthirsty crowd. The cartoon was meant as political satire, according to Draplin, as the students were “in a sense calling for [Brandon’s] head and his job.”

Though the First Amendment protects The Michigan Review‘s satire, one University of Michigan professor isn’t happy with the image, and took to Twitter to say so. The Review tweeted a link to the article on their website, along with the allegedly controversial image, and Kai Petainen, an adjunct finance lecturer, replied: “With current events about ISIS, drawing Brandon decapitated is violent & wrong. Remove it.” Petainen also tagged the University of Michigan’s campus police in the tweet, stating that he, as a University employee, is supposed to inform campus police of “questionable things” he spots around campus.

Though Draplin likened the protest to the Reign of Terror, Patainen argued, “We’re not seeing images of French Revolution popping up, we’re seeing images of ISIS. This is more of a poor editorial decision that seems to lack common sense.” When contacted for further comment by The College Fix, Patainen said, “I’m against censorship, but I’m also in favor of some common-sense and attention to the world beyond us.” He cited an uptick in school violence as well as the growing ISIS threat as reasons why the image should be removed and why he contact campus police. “I cc-d campus police [on Twitter] as I like to keep them in the loop as to the things that I see,” Patainen said.

Meanwhile, debate continues on the University of Michigan campus about both The Michigan Review‘s photo illustration and the larger issue of how to handle student safety in the Michigan athletics program. The athletic debate may continue for some time, but it seems that the issue of the Review‘s image, at least, find a rather simple solution. According to the Foundation for Individual Rights in Education (FIRE):

The University of Michigan is a public institution legally and morally bound by the First Amendment, and an image like this—which cannot reasonably be interpreted as a threat—is no less protected just because violent incidents sometimes occur at schools, or because of recent tragedies in the news. Further, newspapers contain disturbing content all the time; that’s the nature of reporting on real news.

The story here should be about the students who put their health at risk on college fields across the country in the name of winning a game and maintaining the pride of their school, not a satirical illustration meant to accompany a piece in a student newspaper. The image is thought-provoking, and it helps to illustrate the report it accompanies. The University of Michigan appears to be committed to reviewing their safety policies when it comes to student athletics. That same commitment to provide the best for students should extend to its writers and its artists.