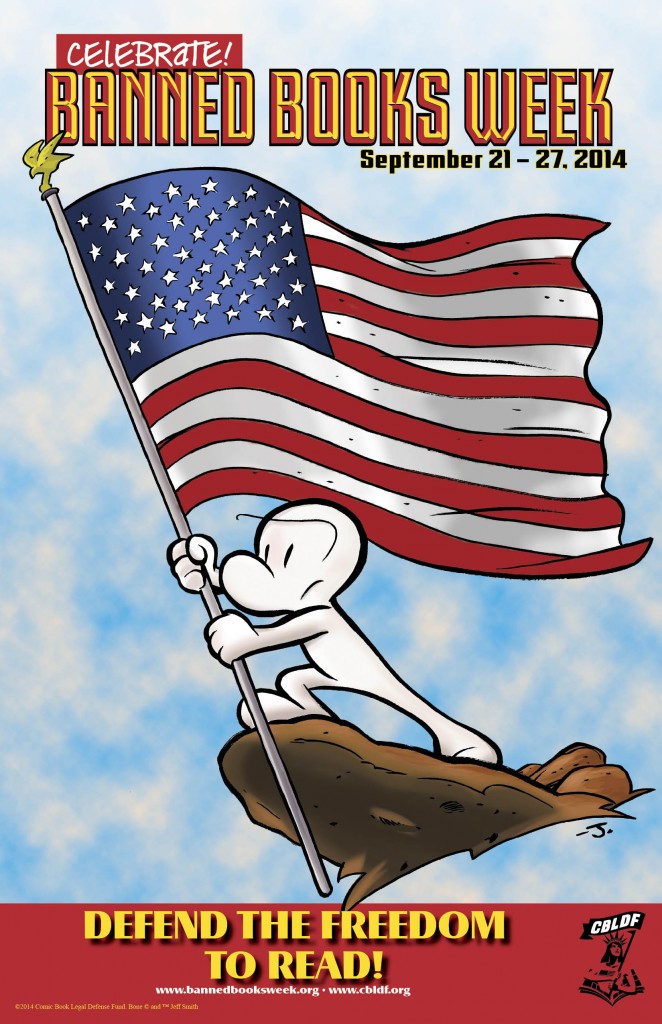 Exciting news for Chicago-area residents, as well as librarians attending this month’s ALA Midwinter Meeting: Bone creator Jeff Smith will be the featured speaker at the Freedom To Read Foundation’s annual fundraiser on January 31! Join Smith, a CBLDF board member, and FTRF, an ALA-affiliated nonprofit and fellow sponsor of Banned Books Week, for a talk and signing at Roosevelt University’s library from 7-9 p.m. Tickets are free for Roosevelt students, faculty, and staff, while suggested donations for other attendees range from $20-30. Here’s the full announcement from FTRF:

CHICAGO — Jeff Smith, creator of the BONE comic book series, will be the featured speaker at the 9th annual Freedom to Read Foundation (FTRF) author event and fundraiser, held in conjunction with the American Library Association’s Midwinter Meeting in Chicago. The event will take place Saturday, Jan. 31, at the Roosevelt University Library.  It is part of the #FTRF45 series of fundraisers in celebration of the 45th anniversary of the Foundation.

“We are thrilled to have Jeff Smith as our featured speaker for this special event,” said FTRF Executive Director Barbara Jones. “BONE has been one of the most frequently challenged books in recent years, and Jeff has shown himself to be a strong voice against censorship. As comic books and graphic novels increasingly find a place in libraries and schools – and in the midst of controversies – FTRF will continue our commitment to support creators, providers, and readers. We are thankful that Jeff is such a strong ally in this work.”

Tickets are available at www.ftrf.org/event/ChicagoMW or by calling (312) 280-4226. The event is open to the general public.

About Jeff Smith and BONE

Jeff Smith is an American cartoonist, best known as the creator of the comic book series BONE. After four years of drawing comic strips for The Ohio State University’s student newspaper and starting his own animation studio, Character Builders, in 1986, Smith launched the self-published comic book BONE in 1991. As BONE’s popularity grew he became known as a co-founder of the Self-Publishing Movement of the 1990s and an early adopter of the graphic novel format.

BONE is now a New York Times bestselling series and has won numerous awards and honors including 10 Eisner Awards and 11 Harvey Awards, as well as European awards from Italy, Germany and the French Alph Art. There have been exhibitions of his work, and Smith was the subject of a 2009 documentary called “The Cartoonist: Jeff Smith, BONE, and the Changing Face of Comics.” He is also a board member of the Comic Book Legal Defense Fund. In 2013, Smith guest edited The Best American Comics anthology, and he is the creator of TÜKI and RASL. His other books include “Shazam: The Monster Society of Evil and Little Mouse Gets Ready,” which received a 2009 Geisel Honor. Visit Jeff Smith online at www.boneville.com.