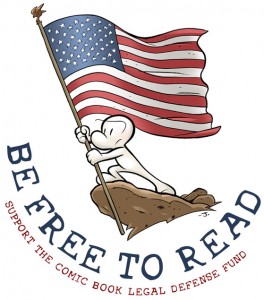 As ComicMix’s The Tweeks — twin tween geeks Maddy and Anya Ernst — launched their Challenged Graphic Novel Reading Challenge last week with Bone Vol. 1: Out from Boneville, a couple of the site’s adult contributors also took the opportunity to weigh in with hindsight on their own formative experiences as voracious readers who were allowed to explore whatever interested them.

For comics industry veteran Martha Thomases, one frequently challenged book changed the direction of her life. At 10 years old in the early 1960s, Thomases was sent home from school for reading To Kill a Mockingbird. Her parents were so incensed, she recounts, “that they took me out of public school and sent me to the only non-parochial private school in town. From there, it was a short step to boarding school, an elitist liberal college, and a northeastern urban ivory tower existence.”

With her parents’ blessing and trust, Thomases continued to read widely and think critically about a variety of topics. She observes that parents who push for certain books to be removed from libraries and schools think they are “protecting their children from ideas with which they disagree,” but that strategy cannot hold up forever. Better, she says, to give children a firm basis and then allow them to explore all sorts of ideas on their own:

My parents, civil libertarians that they were, didn’t stop me from reading what I wanted to read. I mean, they weren’t going to go out and get me hard-core porn or vivid depictions of slaughter (other than what was on the news every night), but they didn’t mind if I read things they didn’t like. We talked about it. That’s what the dinner table was for, talking about those things. That’s what we did on long car rides (besides playing “I Spy”). And while I don’t agree with everything my parents believed (nor did they necessarily agree with each other), I didn’t stray very far, and I respect those differences.

Even better, I know how to form an opinion myself.

Thomases’ ComicMix colleague Molly Jackson also appreciates the opportunity she had to read widely from a young age:

I grew up in a house where everything was fair game. Nothing was off limits or banned, especially books. I could read anything and everything I could get my hands on. I read outside of my age range often and if I had questions, my parents were there to answer them or direct me to someone that could. When I went through my Chaim Potok phase, a member of my synagogue made time just to answer my questions. No one seemed to mind that I was reading books written for adults at the age of 12. They trusted me and my parents to make the correct decision for me.

Jackson believes that parents who try to shield their children from innocent fare like Bone actually do them a grave disservice:

Adults often forget how much kids see, hear and experience from the world around them. Books are the least concern. The 6pm evening news is more graphic and offensive than Bone Vol. 1. And parents today forget that kids have access to the web; something they never did. Even with parental controls, kids can discover adult topics on the internet. They are going to find out about drugs, sex, alcohol and politics one way or another. By hiding it, a message is sent that it is wrong to explore the world. It would be so much better if they were met with guidance instead of shaming. Lack of knowledge is what hurts people the most.

Thanks to ComicMix for highlighting the issue of comics censorship, particularly as it affects young readers! Follow along throughout the summer as the Tweeks read more frequently challenged comics and talk about why some adults try to suppress them.