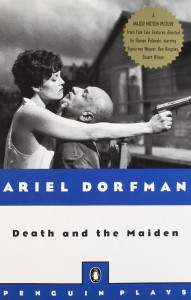 In response to an online petition calling for the removal of Ariel Dorfman’s play Death and the Maiden and Bernard MacLaverty’s novel Cal from the curriculum at Rumson-Fair Haven Regional High School in Rumson, New Jersey, CBLDF today joined with other members of the National Coalition Against Censorship to send a letter urging school district administrators “to make curricular decisions based on artistic and educational merit, and not based on the views of a small number of community members.”

The online petition was started on September 21 with a stated goal of 1,000 signatures, but was shut down far short of that goal after only a few days. At that time, the organizers said they would instead bring their concerns to an upcoming school board meeting next Tuesday, October 13. In addition to demanding the removal of these two specific works from the curriculum, the petition also asked for a ban on “any other material that is not age appropriate” — quite a subjective standard, of course. Finally, the petition also requested “that the administration institute a policy, whereby parents must sign a permission slip if assigned reading material, films or any media contains profanities, explicit sexual passages or vulgar language such as Fuck, Twat, Tits, Dick, etc.”

In the letter sent today, NCAC members pointed out that the works in question were carefully selected by RFH educators based on their literary and artistic merit, and both have been used in advanced junior and senior-level classes for several years. Moreover, implementing the petition’s broader demand would invite chaos into the educational process, said the letter:

Accepting the petitioner’s request to institute a parental permission slip for any material deemed not “age-appropriate” would present enormous challenges to teachers and administrators. Besides the fact that the request depends on a vague and subjective understanding of what ‘age-inappropriate’ is, doing so would impermissibly single out and “red-flag” certain content, inviting complaints and challenges that would overburden educators. Parents, of course, have a right to stay informed of what material is being taught; if they have deep objections to a work their child has been assigned, the school has the option of offering an alternate assignment if that is pedagogically feasible.

The Rumson-Fair Haven school district, which comprises only the high school and draws students from middle schools in the separate districts of Rumson and Fair Haven, does not appear to have a materials challenge policy laying out a uniform procedure for dealing with this situation. The NCAC letter also encourages the creation of such a policy in order to “protect the curricular choices of educators against subjective complaints that often aim to impose the beliefs of a small group on the whole community.”

Check out the full letter below, and watch this space for updates after the school board meeting this week!