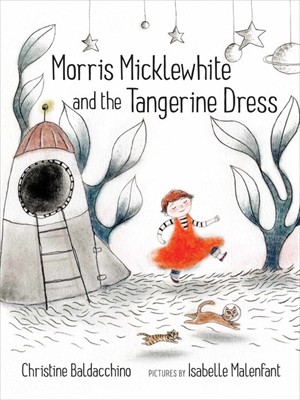 Michigan’s Forest Hills Public School District is standing by a book about a boy who likes to wear dresses, despite one parent’s complaint that it does not present a “normal way” of life. A teacher read Morris Micklewhite and the Tangerine Dress to a third-grade class because students had been asking questions about “people [who] dress in ways that were unfamiliar to them.”

Similar to My Princess Boy, which was challenged and ultimately retained at a public library in Texas last year, Morris Micklewhite is a picture book that does not make any statement on what the main character’s gender identity or sexual orientation may be. Author Christine Baldacchino explained that “I don’t want Morris being labeled at all, whether it be transgender, gay, or straight. Right now, he’s a boy expressing himself, and that’s all we know and should care about.”

But Lee Markham, the father of a student in the class that read the book, says it is “promoting another life” and may give boys who had never previously thought of wearing dresses the idea to do so. He also says that his son’s “right to his freedom of religion wasn’t addressed at all and instead another way of life is just put right in front of him.”

Forest Hills Superintendent Dan Behm thanked Markham for sharing his concerns, but said Morris Micklewhite will not be banned. It is not a part of the regular curriculum in any case, but was carefully chosen by the teacher to address specific questions that students were asking about real-life situations. After reading the book, according to an article in the Grand Haven Tribune, “the children responded by pointing out that this is similar to differences that they already know and accept such as hair styles, hobbies, and sports preferences.” Behm added that once the questions that had preoccupied them were resolved, the students were better able to concentrate on learning in their core subjects.

After hearing about the challenge to her book, Baldacchino said the very reason she wrote it was to “give a voice to kids who are judged by people like Lee Markham every day just for being who they are. I want these children to know that their focus should be on being happy in their own skin (whether it be wrapped up in a tangerine dress or a pair of denim overalls).” Superintendent Behm and the Forest Hills district are to be commended for ensuring that all students can learn in a supportive and open environment!