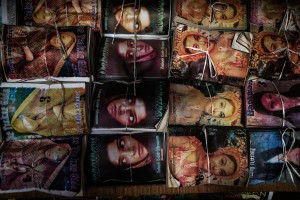 Photo by Glenna Gordon for Slate

A new, unconventional literary movement is taking hold in Nigeria in the form of romance novels. Called “love literature,” dozens of women are printing and even hand-writing thousands of novellas with the intent of speaking out against and challenging certain social and Muslim traditions while, though education, empowering others to stand up and take ownership of their lives.

On the outside, within the cheaply printed pages are tales that mirror your quintessential soap opera-like romance tale. With titles like The Importance of Love, The Woman Who Lost Control, and Sin is a Puppy that Follows You Home, though, the books written by everyday women tackle tough subjects ranging from divorce, domestic slavery, the treatment of women by men, and women’s rights. The books may cast female protagonists in a fantastic and amorous light, but their power comes from the fact that they take inspiration from everyday life. From marriage life to life at school, the books explore women’s sexuality and status in Nigerian society and are act as a vehicle for young women to reflect upon their particular circumstances.

“We write to educate people, to be popular, to touch others’ lives, to touch on things that are happening in our society,” says Hadiza Nuhu Gudaji, one of the movement’s most popular authors, whose work has inspired young women to make changes in their lives.

The books have become so popular in Nigeria that authors like Gudaji have been able to participate in radio shows to offer life advice, and public readings of the books have been broadcast so those who are illiterate can enjoy them. Moreover, the literary phenomena is changing perceptions of how the global community views not only Nigerian women but the face of feminism as a whole. “The fact that I went there and met women making money and writing books and being totally feisty and self confident, that alone shattered my image of what women look like in our image of a repressive Muslim society,” says photographer Glenna Gordon for an article on Slate. She adds:

The books aren’t without criticism, though. In a heavily Islamic society, some see the works as dangerous, fostering unrealistic and rebellious attitudes in young women. Moreover, even Gudaji notes that sometimes she has to be careful of what she does write out of fear of government censorship. “If I want to write about a husband and wife, there is a limitation,” she explains. “A kiss is allowed but nothing deeper, or I will be fighting with that Censorship Board.” In response to the popular demand for the books, the government has begun taking action to have the most controversial titles removed from the marketplace.

It isn’t just legal repercussions that authors face, though. Ado Ahmed Gidan Dabino, a male novelist and head of the Kano branch of the Nigerian Writer’s Association, also notes that many of the female authors also face physical violence. Last year, one author was beaten, and another was gang-raped after she published a book about women and politics.

The dangers of speaking out against tradition are very tangible, and the immense risks that these women take is further testament to their goal to inspire change. “It’s a quiet revolution,” says Dabino. “Nothing hard-hitting, but small, small, and gradually challenging.”