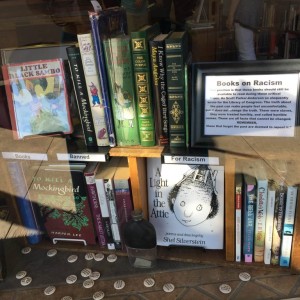 CBLDF has joined a coalition led by the National Coalition Against Censorship condemning the boycott of an Ashland, Oregon, bookstore. The boycott resulted from the display of books that had been banned for racial reasons and was led by the Oregon Shakespeare Festival, which deemed the display “hurtful and offensive.”

Due to financial hardship imposed by the boycott, Shakespeare Books & Antiques has announced that they will be going out of business. It became the center of heated controversy with the festival organization when owner Judi Honoré refused to take down her banned books display—one that Honoré has had set up in the store for nearly four years.

Included in the display were works like the 1937 novel Little Black Sambo and Mark Twain’s seminal classic The Adventures of Huckleberry Finn—both titles which have been heavily criticized for their treatment of race. It was the inclusion, though, of Little Black Sambo, which upset OSF members. By including a book which has become infamous for its racial caricatures, OSF said that Honoré was showing a “distinct lack of empathy for the experiences of people of color.”

In response to the request, Honoré refused to remove the books and stated that “these books should be available in these critical times. I’ve had the window for four years and I’ve never had a problem until now. It’s an educational thing.” She tells NCAC:

I have windows filled with banned books. Everything from the Lorax to Harry Potter to Mein Kampf to Brave New World. I did it as an educational process, and it’s been such a joy in my life for the last four years. People stand outside the window and ask why the books are banned.

Despite support from her community and local government members like City Council Carol Voisin, who said that she “found nothing offensive about the display,” and called it “illuminating,” Honoré was forced to admit defeat after financial and emotional hardships imposed by the boycott led to her decision to close her store.

As a result of OSF’s actions, NCAC led a coalition that includes CBLDF to issue a statement on the boycott of Shakespeare Books & Antiques. Instead of a boycott, NCAC notes that a more productive conversation within the community could have taken place—a conversation that wouldn’t have resulted in “a serious and preventable loss to the intellectual and cultural life of the community OSF serves.” As NCAC writes, “a public discussion about the reasons for the display, the reactions it elicited, and the role freedom of speech has played in the fight for racial justice and social change,” adding:

In pressuring the bookstore to censor the display by removing a book OSF considers offensive, it undermines a fundamental free speech principle — that the response to noxious ideas is more speech, not enforced silence.

Although Honoré has sadly decided to close her store, NCAC encourages OSF to continue forward with the tentatively planned community “talk back” in which productive conversations like the one noted above can take place, hopefully with the intent of preventing future unfortunate cases like Shakespeare Books & Antiques.

NCAC’s letter to the Oregon Shakespeare Festival follows in its entirety.