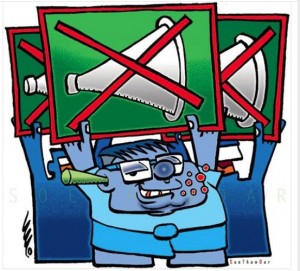 Although 2012 saw the abolition of pre-publication censorship in Burma, many still feel the influence of the decades-long political climate that silenced artists and closed bookstores. A recent set of interviews by DVB demonstrates that a new wave of Burmese artists aren’t standing by, instead testing their new artistic freedom and stepping up to fill a void caused by censorship.

Author San Mon Aung lived and wrote through a time when he says the former military government saw writers and artists as “a public enemy.” Adopting the pen name Myay Hmone Lwin, Aung recalls in vivid detail the rules and regulations imposed by the government that not only saw artists’ works censored, but an atmosphere of confusion and fear that creating art might lead to legal reprimand and even jail time. “There were many ridiculous things,” says Aung while relating a time he was asked to change the cover of a collection of short stories due to the resemblance the character had to the political prisoner Zarganar, who was bald. “I was really surprised and asked why. To be bald is not criticizing the government. So I couldn’t understand what they meant.”

Although Aung adapted to the censorious situation, in 2012, with the veil of censorship no longer hanging over Burma’s head, he decided that he needed to do more than simply write. For so long his community had been denied literature, so he has set out to change that by opening the first book plaza in Rangoon where a whole new generation of young creative people can hang out, read, and experiment.

Political cartoonist Soe Thaw Dar also has lived and drew through the era of censorship, and he now incoproates technology into his work as a means to take his craft to another level. Touching on the subject of religion, which is still seen as taboo in Burma, Dar is using his art to talk about the role that technology plays in expressing oneself, whether it be through the pen or on the page.

San Mon Aung, Soe Thaw Dar, and Saw Phoe Kwar are doing just that and taking one step at a time to help fix the damage to freedom of expression that a political relic of Burma’s past had inflicted on the nation for years.