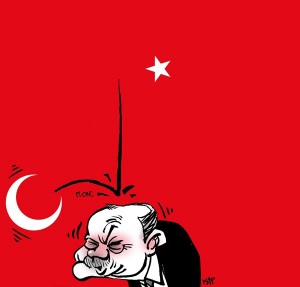 A blog post featuring satirical cartoons of Turkish President Recep Tayyip Erdoğan is currently blocked by court order inside Turkey but freely available elsewhere, highlighting the delicate balance between intellectual freedom and local laws that online hosting platforms must maintain if they wish to operate internationally.

The post on a Turkish blog hosted by U.S.-based company (and CBLDF.org host) WordPress was originally made in November 2013, but only blocked this October after an Istanbul lawyer representing Erdoğan filed a court order alleging that the cartoons were libellous and untrue. According to independent U.K. journalist Dean Sterling Jones on his own blog, WordPress had announced earlier this year that it would ignore any potential takedown requests from the Turkish government. The reality of an actual court order may have forced it to reconsider, however: as a representative told Jones via email, the company was “forced to geo-block the specific sites mentioned in the Turkish court orders or face a whole WordPress.com site block in the country,” meaning that all blogs and other sites hosted on the platform would be unavailable there.

Faced with no ideal options, WordPress chose to geo-block the specific site requested within Turkey but direct users to a multilingual site with directions for circumventing online censorship via services such as VPNs and Tor. It also reported the takedown to the Lumen database, and the WordPress rep identified as Janet J told Jones that the company is brainstorming ways to maximize intellectual freedom and transparency for its users:

There is no good solution to the issue of political censorship, and we are constantly reviewing the processes to find ways to combat it, including taking legal action in Turkey where appropriate. Going forward, we’ll look into making the current process clearer in our next transparency report.

Jones also spoke with Spanish cartoonist Jaume Capdevila, whose work was among the panels featured on the blocked page and also reproduced above. He expressed pride that a Turkish blogger found his cartoon “useful for his struggle for freedom,” and highlighted the importance of laughing at authoritarian leaders through satire:

To laugh means to lose fear, and fear is what keeps the totalitarians in power. It is therefore natural to react against cartoons, against journalists, and against the Internet, which is a means by which the population can inform and organise to recover lost democracy.

The takedown order also comes at a time when Turkish cartoonist Musa Kart has been imprisoned for over a month along with several journalist colleagues from Cumhuriyet newspaper. Erdoğan has used a failed coup attempt in July as an excuse to crack down on journalists, academics, judges, and government workers who do not toe the line. Kart and his colleagues are now facing charges of colluding with the Gulenist movement which Erdoğan blames for the coup, as well as with the Kurdistan Workers’ Party (PKK).