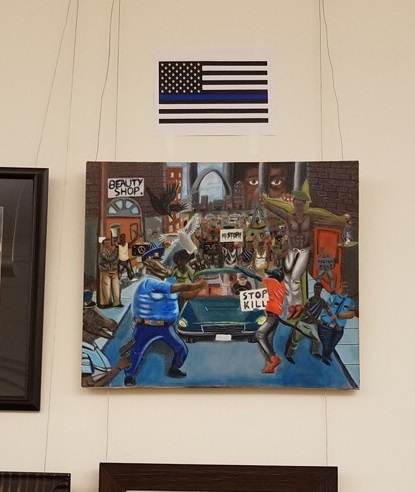 Speech and counterspeech: an unknown party has now hung a “Blue Lives Matter” flag above the painting.

Speaker of the House Paul Ryan has jumped into the fray over a high school student’s painting that currently hangs in an office corridor of the U.S. Capitol complex and depicts police officers with animal heads. Ryan this week sent a letter to the Architect of the Capitol, the office that oversees the buildings and grounds, asking that the painting by 18-year-old David Pulphus of St. Louis be permanently removed.

The untitled painting is just one among dozens of student artworks from across the country selected to hang in a corridor of the Cannon House Office Building for one year as part of the Congressional Art Competition. Pulphus’ work depicts a protest march foregrounded by a police officer aiming his weapon at an unarmed subject. At least one officer in the painting is shown with the head of a boar, while his target appears to be a wolf or black panther, as The Hill suggests. Also prominently featured in the painting is a young African American man crucified on the scales of justice, and protest signs such as “RACISM KILLS.” Pulphus completed the painting while he was a student at Cardinal Ritter College Prep High School in St. Louis.

Although the painting has hung in the corridor since June, it raised no outside notice until this month when Fox News’ Eric Bolling urged viewers to call Missouri Rep. Lacy Clay or their own Congressional representatives to demand that the painting be taken down. Clay staunchly refused to censor the work, but last Friday California Rep. Duncan Hunter literally took matters into his own hands, unscrewing the painting from the wall and then depositing it with Clay’s office staff. Since then, the work has been restored by Rep. Clay and removed by other House members multiple times.

As of this morning, the painting was on the wall and someone had added a “Blue Lives Matter” flag above it–a prime example of counterspeech that responds to the original work without resorting to censorship. Rep. Clay and his newly elected colleague Rep. Jamie Raskin of Maryland, a professor of constitutional law at American University, this week sent a three-page letter to Speaker Ryan pointing out that “in America, if you don’t like a painting you see in a display, you simply move on to the next one. You don’t take it down.”

In an interview from an online radio show, Ryan adopted an illogical argument familiar to anyone who follows book challenges in local school districts–namely, that “this isn’t a question of First Amendment rights.” Ryan and other House members who want the painting removed claim that it does not conform to one of the art competition’s rules barring “exhibits depicting subjects of contemporary political controversy or a sensationalistic or gruesome nature.” But Ryan’s argument that the First Amendment does not apply was seemingly contradicted by another letter to the Architect of the Capitol from Rep. Dave Reichert, a former sheriff’s deputy who also wants Pulphus’ work removed:

While it is not my desire to censor individuals’ freedom of speech and expression, we are a nation of laws and rules and our rights are only as secure as the institutions built to enforce those laws.

The Architect’s office has not yet responded to the letters or to any requests for comment, but according to the New York Times Speaker Ryan will likely have the final say in any case via “the House Office Building Commission, which is controlled by the party in power and can overrule the architect’s office.” Watch this space for updates!