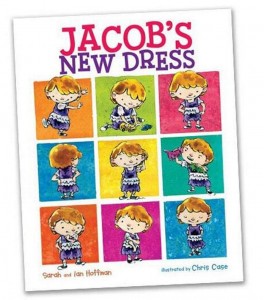 Under pressure from North Carolina state legislators, Charlotte-Mecklenburg Schools this week reversed course on a plan to have all first graders read the picture book Jacob’s New Dress, which centers on a gender-nonconforming boy who wants to wear a dress to school. The book was to be incorporated in an anti-bullying program to ensure the district is in compliance with Title IX requirements on sexual harassment awareness.

In the book, Jacob opts for dresses during dress-up time at school and is bullied by a classmate who says boys can’t wear “girl clothes.” He seeks reassurance from his parents and teacher, who all show full support for Jacob’s right to choose what he wears. It seems that real students like Jacob in CMS schools might not receive the same level of support, however, with the district’s own government liaison Charles Jeter calling the choice to simply read a book about gender nonconformity “an unforced error.”

The book controversy comes one year after North Carolina’s legislature passed and then-Governor Pat McCrory signed the notorious HB2 which requires transgender public school students and others in government-owned buildings to use the restroom corresponding to their birth sex. Although the book never states whether Jacob is transgender — all readers know is that he’s a boy who likes to wear dresses — some parents, legislators, and even officials within the school district seem to see it in that context. According to Jeter, a former state legislator who was one of the few elected Republicans to oppose HB2 last year, going forward with the lesson plan at this time would have been akin to “poking the bear.”

The current plan is for first graders to read Red: A Crayon’s Story, about a blue crayon that has been mislabeled red, instead of Jacob’s New Dress. But in an interview with the Washington Post, Jeter said that lawmakers are not “real thrilled with that book, either” and he expects Red to also receive “more scrutiny in the General Assembly because of this issue.”

Even as Jacob and his dress were unceremoniously removed from the first grade curriculum, CMS board members were in the midst of considering whether to add gender identity/expression and sexual orientation, among others, to the district’s Multiculturalism policy. Even in its current form, that policy states that “equitable academic programs and services which respond to the needs of a diverse student population and which prepare all students for a changing workplace and pluralistic society are essential.”