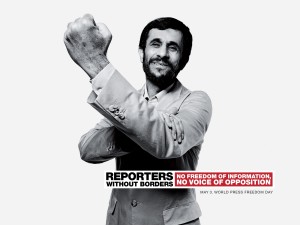 Administrators of a public library in Foxborough, Massachusetts allowed most of an exhibit on press freedom to return to display last week after previously ordering its removal, but two posters including the one at right apparently were considered too shocking for the eyes of the public. The poster exhibit at Boyden Library was curated by a local man from his personal collection.

Most of the posters in the exhibit come from the advocacy organization Reporters Without Borders/Reporters sans Frontières, which often uses deliberately provocative images to draw attention to press freedom issues. Stephen Lewis, the former union official who owns the posters and assembled the display, told the Sun Chronicle newspaper that he has mounted similar exhibits from his large collection of political art in about 80 libraries across Massachusetts over the past 14 years and never before been asked to censor anything.

Lewis originally installed the exhibit in Boyden Library’s conference room on September 5, but was told by the board of trustees on September 14 that all of the posters would be taken down within two days if he failed to remove them himself. Trustees reportedly said that library staff had received complaints about the “graphic and inappropriate nature” of some of the posters. The library apparently lacks any written policy on art exhibits.

When he received the request to remove the posters, Lewis was out of the country and unable to comply. All 30 pieces in the exhibit were eventually removed on September 20, but most of them were rehung three days later after news coverage prompted a backlash against the censorship.

According to the Boston Globe, the two posters that drew complaints were the one above which is doctored to show former Iranian President Mahmoud Ahmadinejad making an obscene gesture to the press, and another showing a man crumpled on the ground next to a trail of dark liquid. The caption says “Ink Should Flow When Blood Flows: Nothing and No One Should Prevent Journalists From Reporting From Combat Zones.” The Ahmadinejad poster is part of a series that illustrates various authoritarian leaders’ contempt for press freedom, some with raised middle fingers instead of the bras d’honneur.

In the midst of the exhibit debacle, the Sun Chronicle published an editorial asking trustees and library officials to recommit to the principles of intellectual freedom:

Yes, some of the images hung in the exhibit may have been disturbing. So is the fact that — around the world — journalists, internet users and private citizens face harassment, imprisonment and worse in their attempts to gather and disseminate information — or even risk being labeled purveyors of ‘fake news.’

That doesn’t mean the citizens of Foxboro should not be exposed to that information.

To ensure that future exhibits are treated fairly, the board of trustees and library staff should immediately draw up a written policy addressing how artworks are selected for display and the procedure to follow if complaints are received. A good place to start would be this detailed interpretation of ALA’s Library Bill of Rights as it applies to public art!