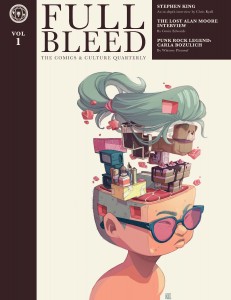 IDW: PDX has launched Woodworks, a new imprint with plans to support CBLDF’s work for literacy and libraries.

The first release under the Woodworks banner will be Full Bleed, a quarterly comics and culture magazine that is curated by IDW Publishing’s Dirk Wood and CEO / Publisher Ted Adams. The print-only, 200-page, hardcover magazine features fiction, nonfiction, interviews, and other articles focused on various aspects of creative culture. The first issue includes an interview with Stephen King and a previously unpublished interview with Alan Moore. Full Bleed is being funded via Kickstarter.

Full Bleed launches in December, and IDW and Woodworks will be working on a campaign to benefit CBLDF and Traveling Stories, a charity dedicated to children’s literacy. According to the Kickstarter, “WOODWORKS intends to make smart books, for smart people… and do what they can to help make more smart people.”

Learn more about Full Bleed and Woodworks on Kickstarter.

← CBLDF Podcast Episode 23: ANNE ISHII of Massive Goods
Be a Comic Defender with CBLDF This Weekend During SPX! →