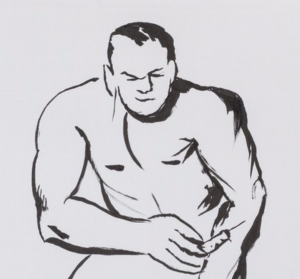 American art icon Raymond Pettibon’s original art from Comic Arts Brooklyn is currently available for bid in Heritage’s Trending Contemporary auction, closing on Tuesday, September 19. Proceeds from this auction benefit the Comic Book Legal Defense Fund’s important efforts protecting the freedom to read. The ink on paper piece is 40 inches wide by 36 inches tall, and was drawn live from Jack Kirby reference at a CAB event moderated by Josh Bayer in 2015. You can bid on the piece here.

Having emerged from the Southern California DIY culture and its punk-rock sensibility, Raymond Pettibon fuses together youthful edginess and political engagement. Drawing from disparate cultural sources—from Marcel Proust to the Bible—the artist’s cartoon-inspired ink drawings on unframed paper recall the look of fanzines and concert flyers, however with an often cryptic semblance of narrative. More recently, Pettibon’s works have been a sustained critique of the Iraq War and American foreign policy, such as No Title (“Why press him?”) (2007), which depicts George W. Bush with bloodied hands and surrounded by pointed, ironic commentary. Pettibon was a recipient of the Whitney’s Bucksbaum award in 2004, and was the subject of the major retrospective A Pen of All Work at New York’s New Museum in 2017.

Comic Arts Brooklyn is a free annual festival of comics and cartoon art organized by Gabe Fowler of comic shop Desert Island. The CAB festival celebrates experimental and difficult work across genres, presenting cutting-edge work alongside visionary classics. Comic Arts Brooklyn will return on November 11 at Pratt Institute, with guests including Jules Feiffer, Emil Ferris, Chris Ware, and hundreds of exhibiting artists and publishers.
Comic Book Legal Defense Fund is a non-profit organization protecting the freedom to read comics! Our work protects readers, creators, librarians, retailers, publishers, and educators who face the threat of censorship. We monitor legislation and challenge laws that would limit the First Amendment. We create resources that promote understanding of comics and the rights our community is guaranteed. Every day we publish news and information about censorship events as they happen. We are partners in the Kids’ Right to Read Project and Banned Books Week. Our expert legal team is available at a moment’s notice to respond to First Amendment emergencies. CBLDF is a lean organization that works hard to protect the rights that our community depends on. For more information, visit www.cbldf.org