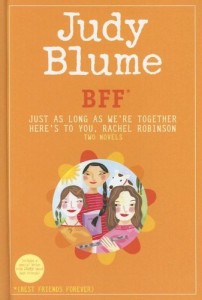 Today, the beloved YA author, free speech advocate, kick-ass feminist, and all around amazing human being, Judy Blume turned 80. Blume has sold more than 80 million books worldwide, written over twenty best selling novels, and essentially created the space between children’s and adult literature (YA was not a category that was around when she began her career in the late 70s).

Deenie, Forever …, every year, somewhere, they’re challenged. When I started, in the 70s, it was a good time for children’s book writers. Children’s reading was much freer than in the 80s, when censorship started; when we elected Ronald Reagan and the conservatives decided that they would decide not just what their children would read but what all children would read, it went crazy. My feeling in the beginning, was wait, this is America: we don’t have censorship, we have, you know, freedom to read, freedom to write, freedom of the press, we don’t do this, we don’t ban books. But then they did.

Blume sees that censorship has no party affiliation, finding fault on both sides of the aisle in America today. While writing an op-ed for the New York Times in 1999, she called out the “politically correct” for the uproar in Brooklyn over a teacher reading a critically acclaimed children’s book, Nappy Hair, to a group of students, the parents missing it’s message of love and acceptance that has made it so popular.
When Blume spoke of the censorship of her own work, she noted, “most of the time they hadn’t even read the book. Even if they had, they only read what I would call the ‘good stuff’.” Effectively pulling salacious quotes out of context to create a self-fulfilling prophecy of moral outrage. Blume writes extensively on her website about her thoughts on why,

So Blume fought fear and became a vocal advocate of National Coalition Against Censorship, regularly speaking out for childrens’ First Amendment rights and the importance of their freedom to read. She found a friend and ally in Leanne Katz, the first executive director of NCAC who served for over twenty years. In 1999, Blume edited a collection of original short stories by some of YA’s most frequently banned authors, Places I Never Meant to Be: Stories by Censored Writers, the royalties benefiting the NCAC. The introduction to the book is a available to read on Blume’s website, and is a compelling history of how she came to be an anti-censorship advocate.
It is a small shame that after so many years of brilliant writing and nuanced public speaking, her work as an advocate for free speech isn’t over. Still, it is hard to imagine better company in the fight for the First Amendment than a woman like Judy Blume.

Happy Birthday, Judy Blume.
Thank you for everything you’ve done and continue to do!