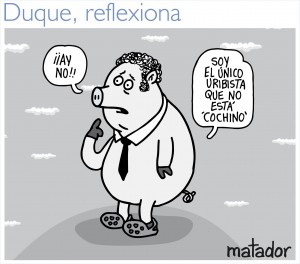 Cèsar Gonzàlez, a political cartoonist who goes by “Matador”, and El Tiempo, a newspaper in Colombia, are being sued by Attorney Josè Reyes Villamizar for a cartoon depicting presidential candidate Ivàn Duque as a pig. Villamizar alleges the cartoon infringes on the candidate’s right to a good name and is offensive.

”I do not think that Matador should draw a new cartoon, he should only retract it in the same space where he published the original,” said Villamizar.

Matador has no intention of retracting the cartoon. He took to Twitter to clarify that the lawsuit only existed to censor his freedom of expression. He also noted the plaintiff, Villamizar, is associated with the Centro Democratico party, which Matador has claimed “alters [his] cartoons and uses them illegally.” Previously Matador accused former Centro Democratico presidential candidate, Òscar Ivàn Zuluaga of altering one of his cartoons and using it as campaign propaganda.

The candidate, Ivàn Duque, has previously mentioned that he respects the freedom of press and cartooning as a form of artistic expression.

“One in life has to learn to laugh at everything, for me cartoonists are artists, they interpret reality, using the freedom that they have at their disposal. That does not bother me. I’ve never stopped being able to laugh at things and also see things through the prism of calmness that they deserve,” Duque said in an interview with The FM in January.

The Foundation for Freedom of the Press holds out hope that this case will finally set a precedent in Colombia, barring individuals from being prosecuted for humor or expressing their opinion. John Bermeo, president of the Mises Institute of Colombia, claims that Colombians have already lost too many freedoms of expression.

“The call of attorney Reyes Villamizar would leave a disastrous precedent for freedom of expression in the country. Anyone could claim that they feel disrespected for what they say about reggaeton music, narco-novelas, the skinny, the short, the ugly, and, as a result, someone would be responsible for saying what humor is good and can be expressed and which is not: this would amount to totalitarian regulation of thought.”