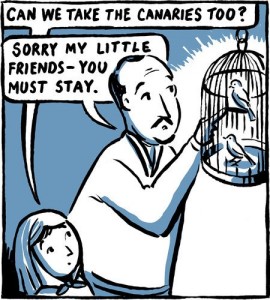 Breaking with their own long-established conventions, the Pulitzer committee awarded the Prize for Editorial Cartooning to the creative team behind Welcome to the New World, a digital comic book delivered in installments by The New York Times. The creators are Jake Halpern, a reporter who followed two Syrian families and used pieces of those interviews to craft the scripts, and Michael Sloan, whose exquisite art draws out, not the differences, but the similarities between the refugees and their new American communities. Previously, the Pulitzer has gone exclusively to creators who both write and draw their cartoons, often simple single or two-panel strips filled with wry examinations of the world we live in. This recognition could potentially change the way that editorial cartoons are viewed in the industry, encouraging more reporters to team up with artists and more papers to consider publishing longer form comic pieces.

Welcome to the New World follows two real Syrian refugee families, who after four years of exile in Jordan finally receive their visas and arrive in America on November 8th, 2016 — Election Day. This set up leaves the feeling that the comic will be a nonstop tragedy of pulling the rug out from under two families who thought their days of persecution were behind them. And while there are struggles, trials, and tribulations aplenty,  the amazing take away is that after the election, laws may have changed but people fundamentally didn’t. Some people are bad, but many are good. And Michael Sloane’s illustration leaves many strips with a gut punch of humanity that makes the reader desperate to live in this world of kindness and family.

Sloan told  The Washington Post’s Comic Riffs, Michael Cavna “I think ‘Welcome to the New World’ expresses values that are important to me: understanding, compassion, and tolerance. I feel that this prize that we have received is a resounding vote in support of these values. and there is never enough understanding, compassion, and tolerance in the world.”

This wasn’t the only move away from the traditional in this year’s Pulitzer Prizes. GQ received their first award ever, for Rachel Kaadzi Ghansah’s raw and riveting A Most American Terrorist: The Making of Dylan Roof. BuzzFeed News was also a finalist for their international coverage demonstrating Russian operatives “engaged in a targeted killing campaign against [Putin’s] perceived enemies on British and American soil.” And, in perhaps the largest leap from previous awards, the Pulitzer Prize for Music was given to Kendrick Lamar for Damn., not just the first Rap album, but the first album that wasn’t Jazz or Classical. The committee described Lamar’s work as “a virtuosic song collection unified by its vernacular authenticity and rhythmic dynamism that offers affecting vignettes capturing the complexity of modern African-American life.”

Without a doubt, the prize’s move towards modernity in categories like music and cartooning cements its continued relevance as the high-water mark for brilliance in free expression. Hopefully, this recognition will open up new markets for those working at the forefront of their fields to find venues and audiences for their art.