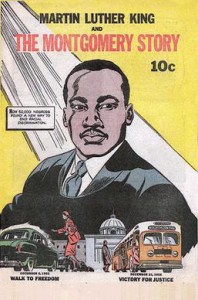 Last weekend, artist and comics journalist James Romberger discovered Sy Barry was the identity of the artist behind Martin Luther King and The Montgomery Story, a civil rights comic that not only changed the medium, but the history of the United States. The books wide distribution through churches and schools created a means to disseminate information on non-violent resistance, a tactic which helped bring about victories in the Civil Rights Movement. The comic inspired Congressman John Lewis who, with his collaborators Nate Powell and Andrew Aydin, created the MARCH trilogy, award-winning memoirs of activism and change.

But until Big Apple Con in New York City last weekend, the iconic artist of the work remained a mystery. Actually, until 2012, most things about the groundbreaking work were still a mystery.

There wasn’t a lot to go on or too many people interested in Martin Luther King and The Montgomery Story at the time, so I had to take more of a gumshow approach to research. I reached out to the few people who had written about the comic before and asked them a lot of questions until I was able to get a look at tsome of the original letters between [writers] Alfred Hassler, Benton Resnik, and others. That got me talking to Jim Lawson and other people associated witht he Fellowship of Reconciliation past and present. Along the way, Professor Sylvia Rhor was incredibly helpful. All the while, Eddie Campbell was giving me feedback from a comics history prerspective about what I was piecing together and how it all fit.

For those interested in reading a version of Aydin’s thesis edited for publication, check it out here. It was published in 2013 by Creative Loafing as their feature article in the “Future of Nonviolence” Issue, guest edited by Congressman John Lewis himself.

In the same year, Aydin gave Romberger a copy of the comic, and when he saw the “beautifully drawn and colored art job was uncredited” identifying the artist became a passion project for him as well. He showed the comic around at which point the names Sy Barry and his late brother Dan Barry came up as artists of time capable of producing work comparable to that in the comic. Sadly there wasn’t at the time any clear way to find Barry, a problem that had come up before. Romberger writes

Obviously, when the guest list was announced and the name Sy Barry was on it, Romberger knew what he had to do. Barry confirmed that he was, in fact, the artist behind the important comic, and while his name had originally appeared on the front cover, at some point during the reprintings it had been replaced with a text box and lost to the annals of history. Until now, that is. Romberger told his fellow artist, that they had been searching for him for quite a while,

Check out the full story and a breakdown of Big Apple con here.

If you were in the area for the convention, make sure you head over to Society of Illustrators and check out the historical MARCH exhibit, which shows the original art and artifacts of the creation of MARCH.