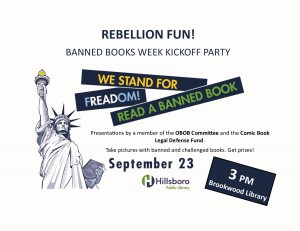 Monday, September 23 kicks off Banned Books Week, this year’s theme is “Banning Books Silences Stories – Speak Up!” Whether you want to learn more about book challenges or just participate in fun and educational programming, there are events scheduled all across the U.S. to help raise awareness and funds protecting free expression.

The 1962 movie starred Gregory Peck, who won the Oscar for Best Actor, and introduced audiences to a young actress named Mary Badham, who was nominated for Best Supporting Actress; at the time, she was the youngest performer to be so honored.

In a rare moment of life imitating art, Mary Badham will not be reprising her role as Scout, but evolving into Jean Louise Finch–the adult version of the same character she played as a child–who serves as the show’s narrator. This once-in-a-lifetime event will not be performed anywhere else and is likely to sell out quickly.

This limited time engagement will run for three shows only, September 21-23, at the Lynn Theater on the Midlothian Campus of John Tyler Community College. Each of the three performances will feature a meet-and-greet reception with Mary Badham following the shows (for an additional fee). For more information on tickets go to https://bannedbooksweek.org/event/to-kill-a-mockingbird-live-performance-featuring-mary-badham/2018-09-21/

As a precursor to “Banned Books Week” (beginning Sunday 9/23 through Saturday 9/29), join the True Believers Graphic Novel Book Club on Saturday, September 22, as we celebrate the freedom to read by discussing a selection of “banned” graphic novels that have been challenged for content in recent years. Our “Banned Books” panel discussion will take place with a live audience at the Galaxy Comic and Fantasy Art Expo in Joliet, Illinois!

To find out more information check out https://bannedbooksweek.org/event/amaze-your-friends-horrify-your-parents-read-a-banned-graphic-novel/

Drag Queen Story Hour is just what it sounds like–drag queens read children’s books and lead creative activities promoting imagination and freedom of self-expression. In honor of Banned Books Week, we’ll be reading books from the ALA’s Top Ten Banned Books of 2017 list. Half of the books on the list were challenged for LGBTQ themes, so this story hour could not be more needed to ensure that these important stories are not silenced. Co-hosted by Drag Queen Story Hour and the National Coalition Against Censorship.

For more information check out https://bannedbooksweek.org/event/drag-queen-story-hour-reads-banned-books/

These are just a few of the many, many events going on around the country to bring people together to speak up against censorship. To find an event near you, check out https://bannedbooksweek.org/events/ and stay tuned to CBLDF’s Twitter, Facebook, and Instagram for more Banned Books Week updates.

Too snag signed copies of banned and challenged graphic novels, check out this week’s rewards for CBLDF donors! Signed Art Spiegelman, Neil Gaiman, Jeff Smith, Raina Telgemeier, and many more authors who have faced challenges for their brilliant work.

Or grab digital copies of some of the most influential works that have faced challenges and bans with this year’s Forbidden Books Humble Bundle supporting Banned Books Week and benefitting National Coalition Against Censorship and CBLDF!