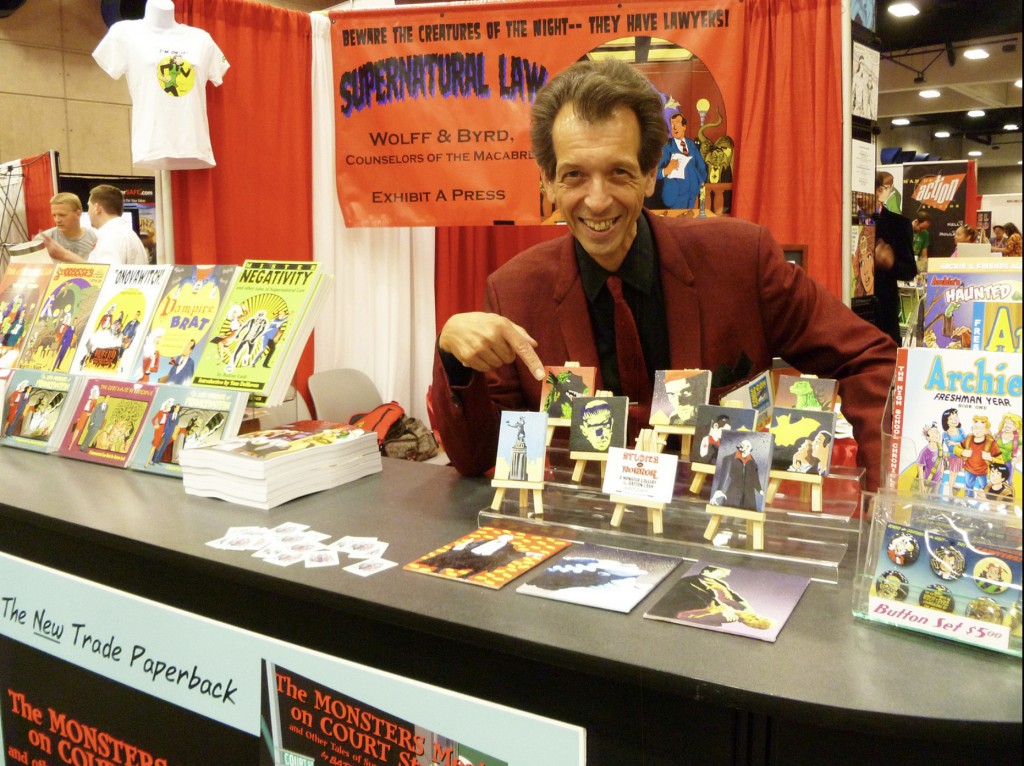 We’re saddened to mark the passing of Batton Lash, creator of the series Supernatural Law, and a long-time friend of CBLDF.

Best remembered for his generous kindness, dapper attire, and welcoming demeanor, Lash was a fixture of San Diego Comic-Con and the self-published comics community. He was born and bred in Brooklyn, where he launched his signature creation, Wolff & Byrd, Counselors of the Macabre as a comic strip in The Brooklyn Paper and The National Law Journal. The strip’s title characters led a small firm that specialized in representing classic horror movie style monsters. Lash’s humor juxtaposed pop culture, law gags, and some truly breathtaking puns in the context of witty situation comedies. Inspired by the self-publishing movement of the mid 1990s, he spun the strip into a comic book series that ran in various permutations for more than 20 years. Lash even published a First Amendment Issue in 2005 to benefit CBLDF!

Batton’s love for comics was arrived at early and steered his life. He was educated at SVA in the 1970s where he helped instigate the school’s comics program. CBLDF board member Paul Levitz notes,

“Batton was one of a small group of conspirators who not only revitalized the School of Visual Arts’ cartooning program by convincing SVA to invite Will Eisner and Harvey Kurtzman to become teachers there, but in doing so, tremendously influenced a whole generation of artists to take comics seriously just at the moment when we were ready for them.”

Beyond his SVA training, Lash was deeply influenced by Steve Ditko, with an affection for the creator’s objectivist works Mr. A and the latter series of “Ditko Packages.”

The mutual love of comics and objectivist literature sparked a connection with Jackie Estrada, the pioneering member of the San Diego Comic-Con organizing committee who leads the Eisner Awards, to whom he was married for 25 years. While in New York he encouraged community building with a regular Cedar Tavern cartoonist meetup. When he moved to San Diego in the 1990s to join Jackie, he carried on the tradition with pre-SDCC get togethers in his 5th Avenue studio.

Lash’s good humored nature was legendary. His Exhibit A Press booth at SDCC was near the entrance of Hall C, and for many served as a first stop as they arrived at the con. It was rare that there wasn’t a cluster of people kibbitzing in front of Batton, who treated everyone warmly and made a point of encouraging new creators in their work. Lash’s courtly personality and vintage wardrobe harkened back to 1940s ideals and manners, making him a singular figure in the American comics world. CBLDF past-President Larry Marder speaks for many in saying, “Bat was a mensch. I’m a far wiser person for knowing him.”

“I can attest to Bat’s generosity personally. We were very close friends in the 90s, so much so that when I first moved to San Diego in 1998 to take my first full time job as Programming Director for San Diego Comic-Con, he and Jackie let me stay on their couch while I found an apartment – also my first. We’d spend long hours on the phone talking deep comics craft and history. He was incredibly knowledgeable about the field, curious about new talent, and dedicated to making his work. Bat and Jackie were always tremendously kind to me, and I’m grateful that they helped while I was starting up in life. As I grew into the profession and took my current job at CBLDF back in the early 2000s, Bat created an issue of Supernatural Law to support me in this endeavor. It was overwhelmingly generous. He was a very kind man, and a model for how one should conduct themselves as a pro. I’m heartbroken for Jackie and grateful to have known him.”