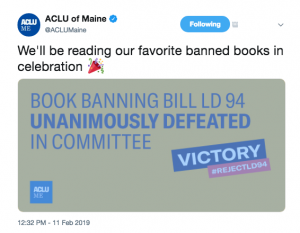 February 11, 2019, LD 94, a bill proposed in Maine that would criminalize educators for assigning or providing “obscene” materials, was unanimously rejected by the legislative committee. The bill was initially proposed after Representative Amy Arata, discovered her son had been assigned Kafka on the Shore, a critically acclaimed novel by best-selling author Haruki Murakami. The subsequent weeks since LD 94 was announced, free speech advocates spoke out in Maine and encouraged others in their communities to stand up and fight for their rights. We congratulate everyone for their success in defeating this legislation.

Arata’s bill was designed to remove the exemption for schools and museums in Maine’s obscenity laws, which to some sounded fine. The problem was that removing the exemption for schools in the obscenity law has little to do with removing what some find obscene from the schools themselves. The exemption exists because there’s a good faith understanding that if a school is assigning a book or watching a movie, there is an inherent educational or artistic value to the media. By removing that exemption teachers and administrators could be charged with a Class C felony offense for assigning “obscene” materials. If they were found guilty, those educators could be fined or serve time in jail.

The Press Herald covered the testimony heard by the legislature from experts both for and against the bill. The problem was put most succinctly by Cathy Potter, a public school librarian in Maine.
“Who is going to decide what is obscene? Who is going to police this law in all of our schools across this state?”And are you prepared to prosecute librarians and teachers for putting books in the hands of our students … because this would make it a crime.”

In response, Arata amended her bill to instead require teachers to provide written notice that the book or other materials contained obscene content or depictions of sexual assault. Both the students and their parents/legal guardians would need to provide written consent prior to receiving the materials.

“This common-sense bipartisan bill will give minors and parents the respect and dignity of choosing what is appropriate for them and their family so that they do not have to feel embarrassed, harassed or traumatized,” Arata said. She said the bill “will help make sure that all Maine schools are safe and nurturing environments for our children.”

Knowing that even with this amendment the legislation was still counterproductive to the education of students, CBLDF and National Coalition Against Censorship (NCAC), in their continued work with Kids’ Right to Read Project (KRRP), sent a letter to Senator Susan Deschambault and Representative Charlotte Warren, the respective chairs of the Committee on Criminal Justice and Public Safety in Maine’s Legislature. The letter outlined how this amended bill would still create the ability to censor works broadly, take classics out of context, and short-change the students’ education. An excerpt from the letter,

What is to be flagged under the requirement remains vague, over-inclusive, and potentially prejudicial and thus likely to adversely affect the quality of education in Maine. It could be used to describe classic works of literature such as “Romeo and Juliet,” “The Diary of Anne Frank,” “Slaughterhouse Five,” and “Brave New World.” This stigmatizing label relies on the emphasis of decontextualized passages that detract from students’
understanding and appreciation of a work as a whole. Once a book is declared sexually explicit, students will lose sight of the book’s other themes.

For this reason, leading educational associations oppose labeling books. The National Council of Teachers of English notes that “‘red flagging’ is a blatant form of censorship; the practice reduces complex literary works to a few isolated elements.” Similarly, the American Library Association has observed how labels are “prejudicial [and] designed to restrict access” to disfavored books.

But despite Arata’s claims of amending the bill, according to Bangor Daily News when LD 94 reached the committee, the criminalization aspect was still entirely intact. Even those on the committee who supported Arata’s idea, could not vote in favor of the bill due to the changes it would make to Maine’s criminal code. “Sen. Michael Carpenter, D-Houlton, said, ‘I understand what Rep. Arata is trying to get at, and I have sympathy for it,’ but changing state law to criminalize this act and changing the state’s education policy ‘is not the purview of this committee,’ and altering the criminal code ‘would be a mistake.”

In a phone call with Bangor Daily News after the legislative session, Rep Arata told them she was planning on drafting a new bill for the informed consent aspects of the law. Potentially this is the same informed consent aspect to the bill she had previously told news organizations she was going to include in LD 94, to replace the criminal liability teachers and administrators would face. “It was never my intent to have anybody go to jail,’ Arata said. Instead, she sought to raise awareness around the issue so parents will know to ‘pay more attention and ask questions.”

She also told Bangor Daily news that LD 94 was “misinterpreted from the beginning.”

Yes, LD 94 was misinterpreted by the start, but the misinterpretation was Arata’s, unable to grasp that erasing the exemption for schools in the obscenity laws didn’t prohibit them from assigning materials she felt were obscene. Hopefully, Representative Arata’s entire experience with LD 94 was a teachable moment, both for her and her constituents. Arata’s lack of comprehension to the criminal consequences of the legislation she created is disturbing, as are her multiple claims of redrafting the bill, only to discover she didn’t alter LD 94 before the vote at all. If she does bother to keep good on her claim to write new legislation forcing students and parents to give informed consent to reading materials, it’s certain that after this fiasco, she won’t be able to do accomplish that under the radar.

Stay informed on legislation around the country by liking us on Facebook and following us on Twitter. To get updates dropped directly into your inbox once a week, sign up for our newsletter!