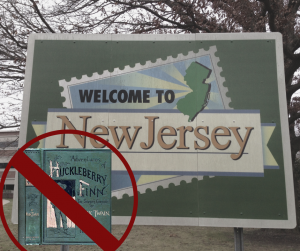 Lawmakers have proposed a resolution in New Jersey politely asking schools to ban Huckleberry Finn from their curriculum due to the excess of racist language in the book. The classic by Mark Twain is seen by many to be one of the first books to tackle the disgusting nature of racism in the early days of Jim Crow legislation. The proposition is a non-binding resolution, so while it would not outright force schools to remove it, it is designed to chill educators choices when creating reading assignments. The two politicians who proposed this motion have no previous experience working in education.

From the resolution, NJ ACR225

The inclusion of The Adventures of Huckleberry Finn in the school curriculum in effect requires adolescents to read and discuss a book containing hurtful, oppressive, and highly offensive language directed toward African Americans. The list of required reading in schools should be inclusive and considerate of all students, without content likely to cause students to feel uncomfortable and marginalized.

Huckleberry Finn has a long history of banning and censorship. Already op-ed pieces have started pouring out blaming a wave of politically correct culture for this, but in 1957 the book was removed from New York City’s list of recommended reading in part for its use of racist language and then again in 1969 Miami Dade Junior College removed it for the required reading citing it “creates an emotional block for black students that inhibits learning.” These problems aren’t new, but banning a book isn’t how to solve them.

Toni Morrison, the acclaimed author who’s exceedingly familiar with having her own work banned, said the book incited a “muffled rage” in her when she read it as a child, but as an adult she came to appreciate its merits. “The brilliance of Huckleberry Finn is that it is the argument it raises,” said Morrison. She also mentioned that calls to ban this book work were “a purist yet elementary kind of censorship designed to appease adults rather than educate children“– a bon mot apt in most calls for censorship.

One of two members of the New Jersey State Assembly who introduced ACR225, Verlina Reynolds-Jackson, said in a phone interview with Politico “There are other books out there that can teach about character, plot and motive — other ways besides using this particular book for that lesson.” ACR225 never explicitly calls Huckleberry Finn a racist book, but Politico asked Reynolds-Jackson whether or not she felt it is. She responded:

I think this is a racist book. I think in the climate that we’re in right now, where you have a president that is caging up our children and separating us in this way, I think to use this book in this climate is not doing the African-American community any justice at all.

Educators should be the ones who decide if a classroom can provide sufficient context and promote the kinds of discussions a classroom would need to have around reading a book like ‘Huckleberry Finn.’ It shouldn’t be for the Legislature to issue kind of a blanket ban, even if it’s non-binding.

Pelizzari also remarked that whether or not the resolution forces schools to ban it, it will encourage challenges to the book in the state of New Jersey if it’s passed.

According to one local news report the resolution came in response to a disturbing set of snapchat posts from a student in the school. These posts used hateful and violent language, and made absolutely no reference to the book by Twain. Reynolds-Jackson acknowledges the two aren’t directly related, but considers this a “teachable moment” making it a post hoc fallacy akin to banning Hunger Games because a bully keeps stealing children’s lunch money. Terrible behavior is terrible behavior and no amount of literature, comic books, video games, or whatever else people try to censor should take the blame for that.

← The Magicians Demonstrates Library Shelving is a Crucial Form of Speech
Comics Censorship Crises Past, Present, and Future – an Inside Look at CBLDF →