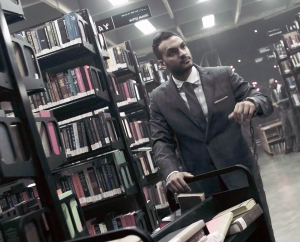 “That’s why these books are so important; they’re such a gift. They can allow you to see other points of view.” – Penny 23, The Magicians on SyFy

Last month, a long-fought victory in a Kansas library allowed the continued shelving of LGBTQIA kids books with other books for readers of a similar age instead of by their Dewey Decimal System numbers, which would have isolated them in nonfiction, leaving them undiscoverable. During the six month fight over the location of these books, many free speech advocates tried to explain in library board meetings and through the press why shelving matters. Allies appeared from an unconventional place when earlier this month, The Magicians TV show hit the nail on the head as to how library shelving can be a powerful form of speech, and why the fight for where these books are placed can be as important as the fight for the books themselves.

The episode, “The Side Effect” (Season 4, ep 6) is set up as stories within a story, and the base level is a conversation between two librarians (in the Underworld, but that unnecessarily complicates matters if you’re not an avid fan). Penny 23, is discussing with a new librarian how understanding about the volumes he shelves is more important than he realizes. The act of labeling, categorizing, or in this case, shelving books, signals to the world what to think of that material. Penny tells the young man, “You think you’ve seen stories like this before so you can guess what’s going to happen, who’s important and who isn’t. But that’s because you are trapped in your own [point of view].”

In the Andover, Kansas public library case, a patron complained that books like I Am Jazz, Lily and Dunkin, and George by Alex Gino were inappropriate for children, despite critics, publishers, reviewers, and librarians all agreeing these books are great for kids. In that patron’s own point of view, she isn’t wrong. But reexamining our point of view, preconceptions, and prejudices is a critical part of both empathy and understanding. In this case, the patron couldn’t separate the concept of “sexual identity” from the concept of “sex.” But this is why libraries are not set up by the patrons, they’re organized by the librarians.

Libraries are not without problems though, as Amanda Ros pointed out in her recent article The Bias Hiding in Your Library, which examines the inherent biases both accidental and by design in the Library of Congress. Ros uses the example that women and people of color often have their own subheadings within a category like “Astronauts.”

While some might not see how this is bias, it is clear to others. By only separating the race and gender of those not white or male, it enforces the erroneous misconception that an astronaut is by base definition male and caucasian. As Penny 23 concludes the lesson to the new librarian he explains, “Where to shelve a book? It’s not a little thing. You’re telling what to value, who to value. You get our responsibility here?”

So how to combat these inherent biases? Well, the system has the fixes built right in.

The first is the well-trained librarians, who in many public libraries shelve items in different ways to make sure that the correct demographic or interested parties see them. They create displays around topics, age ranges, or other areas of interest or importance. They frequently change the displays to match the time of year, or to reflect current events.

Librarians also use liberties when shelving things like children’s picture books and graphic novels, to avoid these essential works getting lost in the stacks. Imagine if Persepolis were shelved with autobiography instead of with graphic novels – would as many people have discovered the vital work? Would it have inspired as many young women to read and create comics? Or comics readers to explore memoirs? Or young adults to learn about Iran?

Librarians also have policies in place for when members of the community challenge items. These policies allow patrons to be heard without devaluing the intellectual freedom librarians are bound to honor. Strong challenge policies protect books. In the case of Andover Public library, they followed their procedures and the books and librarians both came out the other side better for it.

The second solution is the power of speaking up. Comic Book Legal Defense Fund and like-minded organizations will continue to stand up for library displays, books in the collection, and the librarians interested in intellectual freedom. Last year, CBLDF mobilized voices rapidly to fight for an LGBTQIA book display in Maine and was victorious in keeping those books and the people who those books are about visible. In the Andover Public Library case, CBLDF stood up and fought with the librarians for those books to remain in the kids’ section. As sponsors of the Kids’ Right to Read Project (KRRP), a letter was sent in support of keeping the books accessible. From the KRRP Letter,

Far too many young LGBTQ people do feel different​ ​and ​marginalized, placing ​them at heightened risk of mental illness. It is especially important that young people who feel stigmatized and silenced do not face additional obstacles in finding books that reflect their experiences and lead them towards hope and self-acceptance.

The suppression of LGBTQ books further marginalizes a vulnerable minority group. It creates a toxic culture in public spaces, especially the library where everyone should be equally welcome and guaranteed freedom to read, think and explore new ideas.

CBLDF creates resources like Comics – Start Here! to help librarians navigate shelving comics with intention – download a copy for free at cbldf.org/library. To stand up and fight alongside CBLDF,  consider membership.

The last, but perhaps most important fix for the flaws in the system? The books themselves. As Penny 23 tells the new librarian, “That’s why these books are so important, they’re such a gift. They can allow you to see other points of view.” If we continue to stand up for all books to be shelved with intention and visibility, if we keep giving access to the next generation to all the wisdom in the world, surely they will grow up and help us fix the problems in library catalogs and the world at large. Children are not defenseless creatures from which we must hide the world. They are blank slates that we as a community are tasked with filling with as much knowledge and wisdom as possible because before long they will be our neighbors and our peers. Books offer so much of that knowledge and wisdom, often in the insights into other points of view. It’s why books are so dangerous (and librarians smile so mischievously) because they know that books hold the power to change the world.

Help support CBLDF in the fight for free expression every day by becoming a member!

Patricia Mastricolo is the Editorial Coordinator for Comic Book Legal Defense Fund. When she’s not writing about the dangerous erosion of the First Amendment she’s cutting letters out of magazines to craft books of apocalypse poetry.