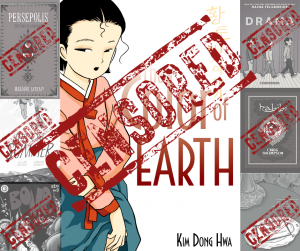 Though CBLDF has Case Studies of challenges and bans of comics that go back over twenty years, when it comes to the graphic novels being challenged in quantity, it’s a far more recent affair. This year’s ALA list of most frequently challenged and banned titles featured two comics, but comics have only started showing up on the list consistently since 2011. It may seem counterintuitive to find anything positive in the rise of comics censorship, but it does speak to how comics have entered the mainstream in schools and libraries and that is superb. But, as you’ll see going back over the last seven years of lists, sequential art is censored at a rate that far exceeds its marketshare.

Out of 326 challenges recorded by the Office for Intellectual Freedom, the second most frequently challenged title was The Color of Earth Korean manhwa series by Kim Dong Ha, for nudity, sex education, sexually explicit, unsuited to age group.
From the publisher’s website:

In the tradition of My Antonia and A Tree Grows in Brooklyn, from the pen of the renowned Korean manwha creator Kim Dong Hwa, comes a trilogy about a girl coming of age, set in the vibrant, beautiful landscape of pastoral Korea.

Out of 307 challenges recorded by the Office for Intellectual Freedom, comics series Bone by Jeff Smith ranked 10th for political viewpoint, racism, violence. Smith responded to this by saying,

There was a spike in comics in 2014 with 3 different titles making the list of 10 based on 311 challenges. It was this that started to confirm how disproportionately comics are impacted by censorship.

#10. Drama by Raina Telgemeier. The first year of this adorable middle school comic appearing on the list, but far from the last. This story has no profanity, no sex, no nudity, no smoking and no drugs. It has one chaste kiss between two boys and that’s the reason it is consistently one of the most frequently challenged and banned books. The official reason listed in 2014 was “sexually explicit.”

#6 Saga by Brian K Vaughan and Fiona Staples, reasons include “anti-Family, nudity, offensive language, sexually explicit, and unsuited for age group.” To learn more about this fan-favorite series, check out the CBLDF article Saga: A Story for Every Type of Family.

#2 Persepolis by Marjane Satrapi, earning the number two spot despite universal critical acclaim for: “gambling, offensive language, political viewpoint,” “politically, racially, and socially offensive” “graphic depictions.” Satrapi is a pioneer as a woman and an Iranian comics creator, and Persepolis is regularly listed among some of the most important works of graphic memoir.

Out of 275 challenges recorded by the Office for Intellectual Freedom, both Fun Home and Habibi both made the list at seven and eight respectively.

#7 Fun Home by Alison Bechdel. Most CBLDF supporters will have seen a rash of attempts to ban this critically acclaimed graphic memoir, having experienced a resurgence after the award-winning musical based on the comic, became one of the hottest tickets in New York City. The reasons in 2015 include violence and “graphic depictions.”

#8 Habibi by Craig Thompson for containing nudity, being sexually explicit and unsuited for age group. Praise for Habibi includes, but is not limited to: “as grand and sustained a performance as any cartoonist has published… and that every mark on the page can be a prayer” (Time); “executed with enormous empathy and something that in earlier times would have been called divine inspiration” (Financial Times);”The book is destined to become an instant classic, confirming the author’s position among not only the most masterful of graphic novelists but our finest contemporary writers, regardless of medium” (The Independent).

In 2016 graphic novels achieved the rare honor of the number one and two slots when This One Summer was found to be the most frequently challenged and banned title out of 323 challenges followed by Raina Telgemeier’s Drama. The
#1 This One Summer by Jillian and Mariko Tamaki was challenged in response to LGBT characters, drug use, profanity, mature themes, including sexually explicit material.

#2 Drama by Raina Telgemeier was also challenged for LGBT characters, called “sexually explicit” for a chaste same-sex kiss, as well as, having an “offensive political viewpoint” for acknowledging the existence of LGBTQIA people.

In 2017 the ALA looked at 354 challenges or bans of 416 titles, Drama was the only comic listed in the top ten, falling one spot to the #3 place. That year Drama was also the only book in Texas to be banned out of all the books challenged. The comic, which received the Stonewell Honor for its excellent portrayal of LGBTQIA youth, was described in one challenge as “confusing.”

Repeat offenders, Drama and This One Summer both made the list again in 2018 at #5 and #7 respectively. It was Drama’s fourth year and the second year for This One Summer. Of the eleven titles, over 63% were illustrated in some way and over 63% contained LGBTQIA characters, demonstrating the vulnerable position that these groups occupy despite their importance. In the ALA’s 2018 list, they expanded it to 11 because the last two books not only tied for challenges and bans, but were also both burned for containing LGBTQIA characters.

It’s wonderful that comics are populating more library shelves and curriculum. But images, as all fans of the medium will attest, are more visceral than words. To see something in pen and ink can feel like gut punch, when reading about it would only feel like a tap. But that’s why sequential art is so important, and allowing creators free expression is the only way to guarantee they’ll keep making art that feels like a punch in the stomach. So don’t expect comics to stop being challenged, but stay involved, be informed, and speak up when they are, so no one loses access to this crucial form of expression.