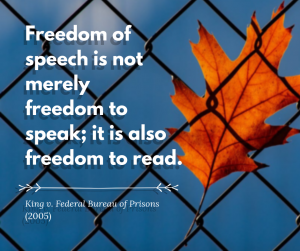 The ACLU is working to reverse a new policy in a Georgia prison that severely limits inmates access to books and publications, by only allowing them to choose from what is available on the book cart. They’ve written a letter to Chatham County Sheriff John T. Wilcher and Chatham County Attorney, R. Jonathan Hart, detailing how this policy that blocks reading material from friends, family, and nonprofits, unnecessarily infringes on prisoners First Amendment rights.

When the policy was first announced, Sheriff Wilcher claimed it was necessary to reduce the amount of flammable material in prison cells, as well as reduce the chance that contraband could be smuggled in through books and magazines. The contraband excuse was recently used by Washington State Department of Corrections in a similar, short-lived, policy that was rescinded after public outcry and the Governor spoke out about the undue restrictions. But that policy was lax compared to this, as the ACLU wrote to Wilcher and Hart, “We have never before encountered a policy that so completely restricts detained persons’ access to books and publications.”

In the full letter, the ACLU details the legal precedent demonstrating the infringement on First Amendment rights including:

The ACLU didn’t just rely on legal precedent, which supports their argument well. They also quoted Yale School School Graduate, teacher, and award-winning poet, Reginald Dwayne Betts, who at 16 years old began an eight year incarceration for committing a carjacking. Since his release, Betts has become a voice for reform in the justice system. Betts spoke about how books changed for him when he was in prison,

When I got locked up, I think, books became magic. Books weren’t really magic when I was a child, they were just something that I [enjoyed] reading. I thought it was important, but when I got locked up it became magic, it became a means to an end . . . . It became the way in which I experienced the world, but more importantly, I think, it became the way in which I learned about what it means to be human, and to be flawed and to want things that you can’t have.

The four page letter, which can be read in full here, is definitely worth the read, but to ineloquently abridge the gist of it, the ACLU goes from offering legal precedent and the words of a poet with a great understanding of how books impact the incarcerated, to breaking down exactly how restrictive it is to only allow access to a book cart. They spell out that by removing everything that doesn’t fit on a book cart, the prison has removed access to millions of books, and essential ideas, available from bookstores, publishers, and nonprofits, to “mere dozens.”

And, perhaps most critically, the new policy leaves family or community members wishing to communicate through books and publications – to send a loved one a book about grief after the passing of a family member, a self-help book to repair a relationship, a job-training manual, books on spiritual or religious enlightenment, or to share the experience of reading a novel together, or any other number of ways in which people communicate and associate through books – without any alternative at all.

The ACLU has asked that Sheriff Wilcher responds by April 30th. CBLDF will keep you updated as new information becomes available.