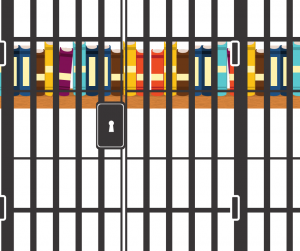 Nonprofit Books to Prisoners (B2P) released a list on Twitter highlighting the vast illogical nightmare that is the Kansas Department of Corrections (KDOC) log of censored books. The list demonstrates that for decades KDOC has been infringing on the First Amendment rights of its inmates by arbitrarily limiting their access to the “marketplace of ideas.” Michelle Dillon, an organizer at Books to Prisoners tweeted the list, calling the list “unbelievable” and pointing to the fact that Kansas has 10,000 incarcerated individuals, and more than 7,000 books have been banned.

A search shows that just under 200 comic books are listed, but a cursory glance demonstrates that the categorization is sloppy and inconsistent. Tite Kubo’s manga Bleach has a single volume listed as a comic book, but then four volumes of the 3-1 are listed as books. Theorizing that perhaps they broke it down into collections being books, a quick glance shows American Vampire being listed twice, once as a book and once as a comic right next to each other. This just continues to confirm the process lacks consistency. Dillon spoke with Newsweek saying, “The difficulties come down to no accountability, no oversight and very vague policies that allow for a lot of interpretation.”

Other comics and manga and the list include, Watchmen (and Before Watchmen), The Walking Dead, Attack on Titan, Y: The Last Man, Full Metal Alchemist, Batman: Hush, Batman: The Killing Joke, The Sequential Art of Amanda Conner, Zap Comix, and countless more. Even a Diamond Comic’s Catalog was banned.

Comics aren’t just attacked for reading on the list, books on How to Draw comics pop-up despite (or maybe because of) their high popularity in prisons. Inmates are often looking for constructive ways to spend their maddening amounts of free time, and time in the library is often limited. So books on how to draw everything from cats to cars, become prized because they only take a pencil and paper to practice and create constructive uses one’s time. Not to mention the verified benefits that art has to stress and mental health. Needless to say, these benefits are enough to get books like Stan Lee’s How to Draw Comics, How to Draw Comic Book Heroes and Villains, and How to Draw Nearly Everything banned in Kansas prisons.

Art isn’t the only villain, the list shows a couple of books on yoga made the list, some on HTML, CSS, PHP, and other computer programming, role-playing books like those for Dungeons & Dragons, and a few books on reading tarot.

According to the Newsweek interview,

Dillon said for organizations like Books to Prisoners, the lack of clear guidelines makes determining what literature can and cannot be sent out to prisoners a difficult and time-consuming task. “It’s like trying to read the stars, you know? Is the moon waning? Is it a Tuesday in February? Okay, then we can send this atlas.”

Prose books banned on the list range from popular summer reading titles for high schools like The Lovely Bones and A Clockwork Orange to wildly popular fiction like Neil Gaiman’s American Gods and George R. R. Martin’s Game of Thrones series. Dillon mentioned that books like Game of Thrones aren’t just banned for the sexual content and violence, “but it’s also because of the maps because, you know, somehow it could lead to a prisoner escaping to Westeros.”