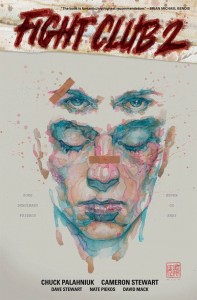 In late June The Salem Reporter released a list of over 1,600 titles that have been banned in Oregon prisons, including volumes of Deadpool, Preacher, The Avengers , and the graphic novel Fight Club 2 . Also on the list are a wide variety of manga titles, like Berserk and How to Summon a Demon Lord.

Oregon Department of Corrections takes pride in the fact that in just the last three years, they have allowed in 98% of the 65,000 books they reviewed that were sent to inmates. And, while many articles following the list focused on the high number of books about technology and programming that were banned, The Salem Reporter explained that “Technology-related books are reviewed by a three-person committee of information technology workers who understand the security challenges specific to prison.” Which is commendable in a lot of ways, and as non-profit boost to other skills that sequential art has to offer often go overlooked in more settings than just OR prisons.

Comics and manga are often unfairly targeted for violence and sexuality because their visual nature makes the content seem much more visceral, creating a more impactful reaction than novels with similar degrees of both tropes. By censoring works like Zap Comix, and Berserk the OR DOC is reducing them to their basest elements, and not taking into account the importance of these movements in art and comics history. These are regular problems that sequential art comes up against in more than just prisons, as people still struggle to see the importance of comics as literature and an exploration of free expression.

Fan-favorite novels like Neil Gaiman’s American Gods and Charlaine Harris’s Dead Until Dark (aka the first Sookie Stackhouse mystery) also made the list, the first for containing simulated sexual acts and the second for containing sexually explicit material. In fact, the majority of the list is banned for having some sort of sex in it or referencing sexuality in some way. This is a common issue at prisons, and most states have bans on sexual material for inmates. Still if someone asked the legions of American Gods fans what struck them most about the book, it’s hard to imagine many of them bringing up sex before talking about the accessibility of mythology from around the world, the beautiful writing, the mystery at the lake, or any of the many other aspects of the book that can make it a great gateway into a love of reading.

Oregon only allows books sent to inmates that are in great condition, so they do not accept many book donations or comics donations. This can be destructive in several ways, because book donation groups tend to be the first warning sign when states ramp up internal censorship, noticing an increase in rejected books, or trouble getting certain texts through. It also makes it prohibitively expensive for lower-income families to provide reading material for those incarcerated, and though prison libraries do their best, the time allotted to inmates is limited, as is the selection of material. If you are interested in learning more, check out CBLDF’s guide to book donation and reach out to a local organization near you that helps give gently used comics a good home.