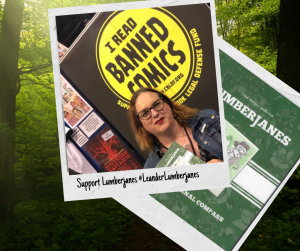 Last week CBLDF protested the abrupt cancellation of popular comics author, Lilah Sturges, just two hours before she was scheduled to talk about Lumberjanes at Leander Public Library in Texas. The city gave inadequate reasons, claiming temporary changes to library event policies, as well as the lack of background check, that was never discussed with Sturges when the library reached out to her about the event. CBLDF authored a letter to the city council calling for the event to be rescheduled, and calling out the treatment of Sturges as discriminatory, despite the city’s claim it was a miscommunication. Now, local news has interviewed some of the staff of Leander Public Library, and they have each independently confirmed that, yes, this was likely an act of discrimination – against Lilah Sturges and the LGBTQ+ community.

Over the weekend, the local news organization, Hill Country News, that has been covering this story from the jump, updated their coverage to include: “In exclusive interviews with Hill Country News, several library staff members, and later Council member Christine Sederquist, said they strongly believe the city’s actions were discriminatory and aimed at silencing voices that generate controversy.”

Leander had said publicly in statements and via their spokesperson that the event was canceled for not meeting the new, temporary criteria for library events. CBLDF wrote in their letter to the Leander city council:

Spokesperson for the city, Michael Neu, had said previously, “We failed to have the discussion with library staff about what the nature of some the events involved. It wasn’t brought up initially as one of the events we were considering, so it was an issue that we felt needed to be addressed immediately as soon as we learned about it.”

But in a series of exclusive interviews with staff members of Leander Public Library, each told Hill Country News that Parks and Recreation Director Mark Tummons and Neu approved of the Sturges event. The library staff had wanted “guidance” given the temporary policy changes, and they were given “explicit approval” for the graphic novel book club to have Sturges speak. From the article:

Each staff member said it was not mentioned that Sturges was transgender during the discussions because the city only asked about how many people would be attending, and it was not an LGBTQ event – the author was only invited because the club was reading her work.

Each staff member interviewed by the local paper also spoke about Neu and Tummons saying the library could not have PRIDE as the theme for June. The men asked the staff to hold off on having any Pride related story hours until after a review of library policies was completed, despite the continued comments to the public that these “temporary bans” would not affect library events. But that isn’t true, because Sturges was invited to the library by the library staff in an email in May.

Sturges took to Twitter despite the hectic time of being at Comic-con to thank her supporters:

I’m unbelievably grateful for the hard work of the @CBLDF, @ncacensorship, and the
@aclu for their efforts to stem the tide of censorship and bigotry in the wake of my talk’s cancellation, and so appreciative of all the support I’ve received this week.

It has been so incredibly heartening to see these organizations spring into action and to see so many individuals express their concern. Things can seem so bleak but it’s good to know that there are folks out there who care. At the end of the day, #lovewins

Council Member Christine Sederquist was the lone voice questioning what had happened that led to these temporary bans at last week’s city council meeting. She criticized the decision to implement the bans and pointed out the lack of justification for the change. She also noted that they could change this action immediately, and called for a vote, to which no one seconded. Sederquist seemed to be the only person concerned that the city council was being held responsible for an act it never voted on, telling the Hill Country News that she has subsequently placed formal requests for information.

“It wasn’t a council action… why are we not currently renting out rooms?” Sederquist asked, waiting for several minutes and receiving no response from city staff. “Somebody took the action. Who was it?”

The end result of last week city council’s meeting was to table any changes to library policies, following letters from CBLDF, ACLU, and the Texas Association of Libraries. That decision is a far cry from dismissing them entirely, and it does nothing to address the discrimination that Sturges already faced. If you’re interested in having the event rescheduled, or supporting inclusive libraries events in Leander, Texas – consider tweeting @CityofLeander and @LeanderPL and calling for an immediate rescheduling of the Lumberjanes event. Use the hashtag #LeanderLumberjanes to show your support, after all, there’s a lot that can be learned about Love & Acceptance from the amazing campers at Miss Qiunzella Thiskwin Penniquiqul Thistle Crumpet’s Camp for Hardcore Lady Types.

Support CBLDF and score a copy of Lumberjanes: The Infernal Compass signed by Lilah Sturges! It is an exclusive variant cover of the first Lumberjanes original graphic novel!

← ACLU, ALA, & More Join CBLDF in Fight for First Amendment in Texas
NJ School Board Decides Fate of 13 Reasons Why & Todd Strasser Books →