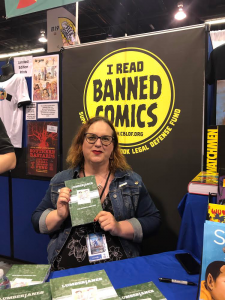 Last week the Leander Public Library canceled a much-anticipated event featuring transgender comics author and advocate, Lilah Sturges, just two hours before it was slated to begin. According to the Hill Country News, the library emailed Sturges to notify her of the cancellation, blaming “unforeseen events.” Since then they have blamed recent changes to city policies about library programming, but these changes have not officially been approved. CBLDF contacted Sturges about the sudden and discriminatory cancelation, and at the behest of the author, has sent an official letter to Leander City Council asking them to reschedule the  event.

From the Kids’ Right to Read Project letter:

Spokesman of the city of Leander, Michael Neu, claimed the city was unaware of the Sturges event, telling the local paper:

Neu clarified recent policy changes on how the library events are scheduled and managed, citing a new prohibition on “any event that is not directly organized by city or library staff or isn’t included in the Central Texas Library System’s slate of recommended performers.” Neu admitted under the previous guidelines the event wouldn’t have been affected, as that crux of that temporary ban had to do with prohibiting “performers,” but recently the city increased its scope of programming bans to include all those “events involving outside groups meeting with or at least hosting an activity in front of children and young adults.” Whether an outside group was involved with bringing Sturges to the library wasn’t clarified in the article, however, Hill Country News did say that Sturges was invited to the library by the staff in an email on May 7, 2019. No official prohibition to library events has been passed by the city council yet.

When Neu was asked about the fact that the popular author was only given two hours notice, Neu said, “There are some communication challenges we have internally with the library, so we’re working on that.”

This is not the first time Leander has targeted LGBTQ+ community events scheduled at the library, and in fact, the changes to policy Neu  references came after a Drag Queen Story hour planned for June that some protested and was subsequently canceled. The performers associated with the Drag Queen Story Hour were notified by email that the city council had canceled the event. Despite the email and press release, Hill Country News reports

no public record of a city council meeting addressing the issue could be found at the city’s public meetings website, and it is still unclear whether the city council did in fact order the cancellation.

According to one local who commented on the most recent story, Sturges’ event cancellation and the previous ones are not indicative of the city of Leander, saying that City Council may not have been involved in these decisions. “City Council Meeting, July 18 at 7:00. See y’all there to ask about what the heck is happening. Who is making these decisions and why on earth do they think this represents Leander?”

Sturges had planned to speak about her wildly popular work on the award-winning comic series Lumberjanes. Sturges wrote the series’ first original graphic novel, Lumberjanes: The Infernal Compass, which offers readers an opportunity to enjoy their favorite five “hardcore lady types” in a new adventure filled with adventure and acceptance.

Perhaps the city council meeting tonight will offer some more clarity on these recent decisions to censor library programming, as well as a chance for librarians and patrons to offer their own opinions about the recent rash of abrupt cancellations. Stay posted to cbldf.org (or sign up for our weekly newsletter) for any updates to this story.

Read the full letter to the Leander City Council Below: