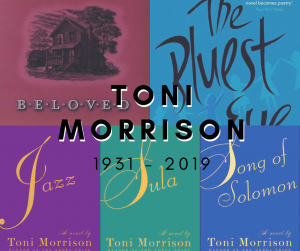 Nobel Laureate and master author Toni Morrison passed away at 88 earlier this week. There have been many beautiful and thoughtful obituaries that examine her trailblazing life and life-changing words. Morrison’s books are critically respected the literary canon and successful in a commercial way that defies stereotypes of the highest echelon of literature. It is as difficult to categorize her brilliance and success in life as it is to categorize her extensive catalog of books. But one aspect of Morrison’s personality was her vocal dislike of censorship.

Morrison’s books frequently appeared on the American Library Association’s annual list of the Most Frequently Challenged and Banned Books. CBLDF often wrote about challenges to The Bluest Eye, Beloved, and fought to get these critical texts back in the classrooms and libraries where they belong. The Washington Post recently wrote a piece looking at comments on social media about how Morrison’s work changed people’s lives, and it is a wonderful reminder to why keeping access to these texts is crucial.

Morrison spoke eloquently about censorship, and often defended other writer’s works that were under fire. Famously she talked about how the first time she read Huckleberry Finn it incited within her a “muffled rage” but as an adult, she came to appreciate its merits. “The brilliance of Huckleberry Finn is that it is the argument it raises,” said Morrison. She also mentioned that calls to ban the book work were “a purist yet elementary kind of censorship designed to appease adults rather than educate children“– an observation which somehow encapsulates censorship in schools and libraries on a whole.

Ten years ago, Morrison worked with PEN America, to create Burn This Book, a book of essays that examines censorship and the way that literature can shape the world we live in. From this project, Morrison gave us insight into her own thoughts about the censorship which she so regularly faced as an author.

The thought that leads me to contemplate with dread the erasure of other voices, of unwritten novels, poems whispered or swallowed for fear of being overheard by the wrong people, outlawed languages flourishing underground, essayists’ questions challenging authority never being posed, unstaged plays, cancelled films — that thought is a nightmare. As though a whole universe is being described in invisible ink. Certain kinds of trauma visited on peoples are so deep, so cruel, that unlike money, unlike vengeance, even unlike justice, or rights, or the goodwill of others, only writers can translate such trauma and turn sorrow into meaning, sharpening the moral imagination.

Morrison will be missed by all who knew her, both in her life and through her work. She will be missed by all those who will read her in the decades and millennia to come – because it is doubtless her writing will last as long as humanity does. If you can, go out and celebrate her life this week by reading one of her books, or any book or comic that faces frequent bans and challenges. But you can carry her memory forward by fighting for free expression at every turn, as she did. The best way to honor her great work is to continue it and to continue to fight for every voice to be heard.