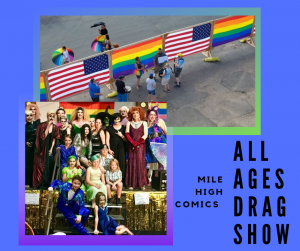 In September, CBLDF reported on an all-ages Drag Show at Mile High Comics in Colorado that had drawn the attention of protestors, including an SPLC identified hate group, Proud Boys. Now this iconic local comics shop has made national news again, as flyers warning of white supremacist groups planning to protest the next event get passed around the neighborhood, and militant dressed counter-protesters have started showing up to each event. Chuck Rozanski, Mile High’s owner who performs at each show as his Drag persona Bettie Pages, doesn’t care much about either the protestors or counter-protestors, focusing instead on creating a safe space for LGBTQ+ youth. Rozanski told the
Denver Post, “I am an advocate for folks’ transgender rights and also for kids’ rights, and so I’m working all the time to try to make sure young people get the opportunities that are currently being denied to them.”

Since February, Mile High Comics in Denver, Colorado has been hosting an all-ages Drag Show one Sunday each month to raise money for a local scholarship fund. In addition to drawing crowds of fans interested in supporting the store and raising money for a local nonprofit, it has also drawn a crowd of protesters, including a group called Proud Boys, who the Southern Poverty Law Center has listed as a hate group. In response to the hatred shouted at attendees, a volunteer Parasol Patrol has been organized to shield people as they enter the Drag Show.

Back in July, according to Mile High’s owner, Chuck Rozanski, in a post on the store’s website, the protestors at an event began to get out of hand, going out of their way to “provoke a confrontation.” There were only 18-20 protesters at that event, and nearly 50 volunteers for Parasol Patrol, plus two off duty Denver cops for security, and it still wasn’t enough to handle the volatile group.
Rozanski wrote,

Suddenly (just as we were seemingly about to be overrun) fifteen Denver police officers materialized out of nowhere. They set up a picket line between our families and those awful bigots, frustrating those nasty people beyond words.

Rozanski, as his Drag alter ego Bettie Pages, came down (dressed tastefully for the evening in a lovely ivory gown with matching opera gloves) and stood shoulder to shoulder with the police in front of the store, to absorb the hatred being shouted by the protestors. Specifically worried about the children on their way to the event, Rozanski stood there for an hour listening to the nonsense, but wasn’t impressed, writing later on the Mile High blog, Honestly, those people are dumber than rocks.”

This past week protests escalated and drew a notable appearance by alt-right group Proud Boys. Proud Boys are a male-only group founded in 2016 who advocate political violence. Rozanski wrote “Their militaristic attire, and the masks and hoods of several other protestors, absolutely appeared to be threatening.” Rozanski took to the blog and spoke about the night, noting that despite the 30+ screaming, it was the most successful drag show to date, with over 400+ happy attendees helping to raise nearly $3,000 for a local scholarship fund.
Some of the real heroes that night were the 75+ parents and friends who volunteered for the Parasol Patrol, where brightly colored umbrellas are used to help block attendees from the noise and negativity being shouted at them. This Parasol Patrol was organized by Eli Bazan and Pasha Eve, and anyone interested in joining that volunteer group can learn more on Facebook. But, as Rozanski wrote, the Patrol isn’t a perfect fit for everyone,

Only apply, however, if you can always maintain a sense of peaceful decorum, even under duress. We do not want anyone in our group to engage (or attack) the neo-Nazi, alt-Right, and Fundamentalist Christian protestors. As much as we may disagree with their nastiness and vile insults, their right to their opinion (and free expression thereof) is enshrined in our national Constitution. Simply put, we cannot seek to silence them without putting ourselves at risk for being silenced if we (at some point) express an equally unpopular opinion. That’s how a free society works.

It’s difficult not to want to silence those that offer negativity and hate, but to protect a free society by protecting free speech is a lofty goal but one that is well within reach for this Denver comics community.