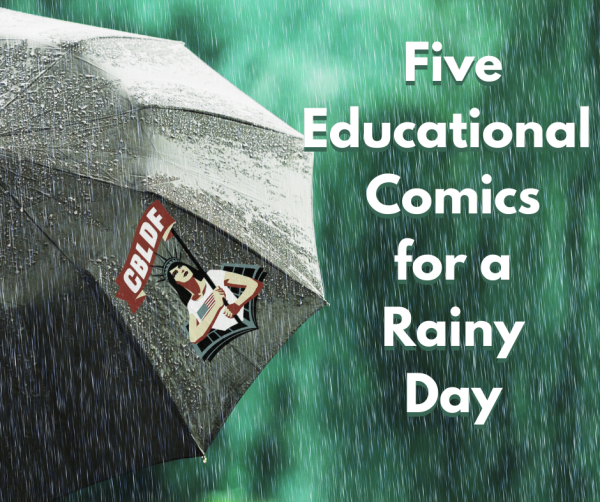 Many families are making new routines and creating new habits to prioritize learning and self-improvement during this stressful time. Within that self-improvement, a lot of the activities kids can still participate in involve going outside with family and getting exercise, playing sports, and using up a lot of energy. So what to do with a few rainy days? Check out these comics, some of which are part of larger series, each tackling a different subject in school. These comics are more than just reading, they offer puzzles, problems, and teach valuable information that will engage kids with their classwork, and make learning fun on a difficult day. 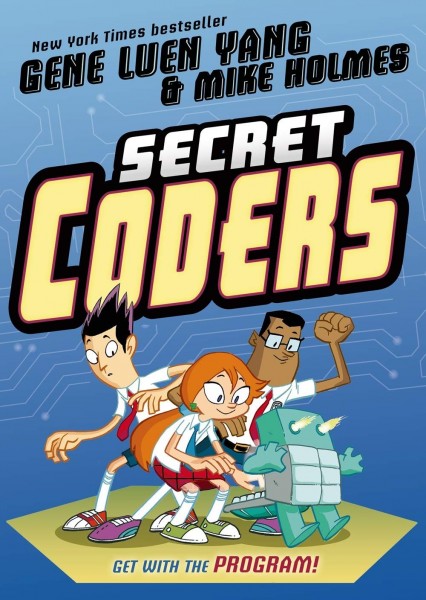 A traditional school mystery meets a programming puzzle book, Gene Luen Yang proves once again that learning is fun, and comics do more than amuse, they improve. From Publisher’s Weekly Review,

Twelve-year-old Hopper can’t help but notice that there’s something strange about her new school; the spooky architecture, leafless trees, and robotic birds with too many eyes allude to a mystery hiding just beneath the surface at Stately Academy. Hopper isn’t alone in her suspicion, and she and her new friend Eni resolve to get to the bottom of it. After an eye-opening revelation, they realize that they can use simple programming language to unlock Stately Academy’s secrets. Yang (Boxers & Saints) sneaks coding lessons into the story, imparting the basics of binary numbers and scripting in the form of riddles posed to protagonists and readers. With this knowledge, Hopper and Eni make startling discoveries that put their coding skills to the test, including the operation of a silent, chelonian robot that immediately and precisely obeys its user’s every command. Accented with vivid emerald green, Holmes’s bold cartoony illustrations are a natural fit for Yang’s geeky enthusiasm, and their combined effort offers an enticing first taste of coding that may very well yield some converts. Ages 8–12.

This is the first book in the series, so if you like them make sure to keep going – there’s lots more to learn! 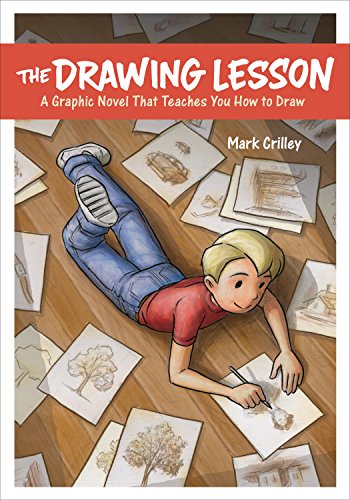 This comic is a first, as it attempts to teach the reader how to draw, and can inspire kids and adults alike to pick up a pencil and spend some time sketching. From Kirkus Reviews,

Proportion, negative space, perspective, lighting, and other drawing basics are covered concisely and informatively, so a student could easily follow the clear drawings to benefit from Becky’s lessons. Crilley develops his characters fully, making this a true novel and not simply a narrated drawing lesson. An original and accessible way to learn to draw. (Graphic nonfiction. 10-14)

Wall Street Journal said, “Engaging…A pleasant diversion for a long summer afternoon, The Drawing Lesson is likely to result in lots of ambitious sketching among readers ages 7 to 14.” And while this isn’t part of a series, teenagers and advanced younger kids can enjoy Crilley’s other art books to progress this skill further as they advance. 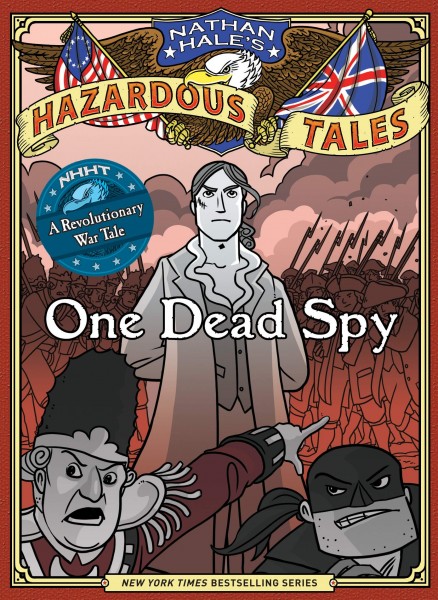 Whether you want to engage your child in history, or just get them to let you listen to Hamilton in the car, Nathan Hale’s Hazardous Tales is a must-read series. From the Kirkus Review for One Dead Spy,

The conceit of author Hale’s new series of Hazardous Tales is that his narrator has been swallowed by a big book of history prior to being hanged and thus knows the future of the country he helped bring into being. It’s a Scheherazade sort of premise, as Hale, convicted of espionage, forestalls death by telling stories from American history. In this volume, he’s helped by the hangman in telling the story of the early days of the revolution. He takes readers from his college days at Yale to the Boston Massacre, the Boston Tea Party, his joining the 7th Connecticut regiment, the Battle of Bunker Hill and other pivotal scenes in New England and New York City, where Hale works as an “intelligence officer” following the movements of the British troops to help General Washington develop his war strategies. Hale is caught and to be hanged…but not before he has, in this series, tales to tell. As in Big Bad Ironclad, which publishes simultaneously, the backmatter presents biographical sketches of the major players, further commentary on the execution of Nathan Hale, and even a mini-comic on Crispus Attucks of Boston Massacre fame. An innovative approach to history that will have young people reading with pleasure. (Graphic historical fiction. 8-12)

Don’t forget CBLDF offers free teaching resources, so if you are looking to bring these tales to life in your house, check out Using Comics in Education: Nathan Hale’s Hazardous Tales for help breaking down the series into teachable lessons, and ideas for assignments to spark involvement. 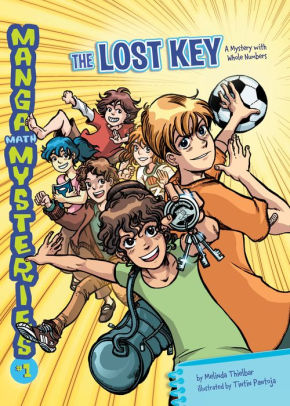 The Lost Key: A Mystery with Whole Numbers

This math manga is the perfect thing for a child you know could be great at math if they could only find a point of interest. From the Publisher’s Weekly Review,

Joy, Adam, Sam, and Amy attend a kung fu school where they learn to be smart, cool-headed, and honest. One weekend, the school master entrusts Joy with the key to the school. When Joy discovers that the key is stolen and the school is ransacked, she enters into a world of desperation as her teacher’s trust in her is compromised. The four students use addition, multiplication, and division to discover what they already know about the theft to move forward in their pursuit. Illustrations (minus speech balloons and text blocks) give readers clues to the solving of the mystery before the students at the kung fu school do. The artwork is manga-inspired with more American-style colors. While the book is best suited for higher level transitional readers, the plot comes across as one long drawn out math story problem. Ages 8–11.

The best thing about this manga is that it is currently available through Hoopla, an app some libraries offer for getting digital content. Check your library website to see if you have access and borrow it today! 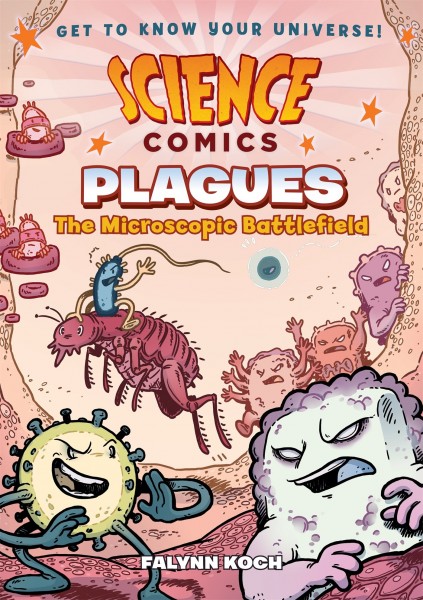 This series covers everything from the ocean to outer space each volume taking a fun, and even silly, but always factual look at the featured topic. During these anxious times, the Science Comics Plagues volume isn’t for everyone, but if you have the type of children who feel better when they understand something, they might benefit from comic exploration into viruses and immune systems, that is essentially positive and reassuring about our bodies and our medical advances. From the Kirkus Review for this comic,

Medicine joins our immune systems in squaring off against microbial invaders.

Using what amounts to an anatomical holodeck, white-coated, olive-skinned Elena squires two dim-bulb bacilli, Bubonic Plague and Yellow Fever, through a thymus gland and other tissues while lecturing on the causes and treatments of infectious diseases and trying to enlist them as vaccines in the fight against their own deadly kind. Along the way readers come face to face—literally, as all the cells in the cartoon panels are anthropomorphic—with a large cast of common disease bacteria, viruses, fungi, and protozoa on one side and on the other, six kinds of tough-guy leukocytes (“Git yer flu antibodies ready, y’all!”) the body produces in defense. In laying out a general history of plagues and medical advances, accompanied sometimes by thrillingly gruesome illustrations, Koch covers highlights and lows, such as how smallpox was used as a bioweapon in the French and Indian War, but avoids mention of the various means of transmission in the spread of HIV and leaves other STDs out of the picture entirely. Still, she injects heady doses of both history and histology into the tour, lightens the load with humor (of a sort: “Ha! Jenner put a lot of pus in that kid!”), and hints at promising new directions in medical research.

A reassuring picture of ever more stout defenses ranged against a scary, invisible world. (Graphic nonfiction. 11-14)

If this volume isn’t right for your kids grab Science Comics Dinosaurs, Skyscrapers, or Crows, and enjoy together, there are lots of great options in this series.

To get more tools for teaching remotely, or teaching at home, check out CBLDF’s Free Remote Education Resources today!

← What To Do During A Shutdown Order
Remote Retailing: Sales Strategies for Stores Affected by a Shutdown →