Today’s super-duper sneaky-peak is of a quartet of one-of-a-kind artist sketch cards of characters from Jeff Smith’s masterwork, Bone. 2011 marks Bone’s 20th anniversary of publication as a comic book. There will be all sorts of celebrations surrounding this important date as the year rolls on.

I’ve known Jeff and Vijaya about as long as anyone in the biz. Cartoon Books and its noble crew are a tremendous operation — really good people. Jeff is someone who both the Comic Book Legal Defense Fund and I can always count on in a pinch. Jeff’s generosity to CBLDF over the years has been significant and greatly appreciated.

Jeff was one of the very first people I called to pitch the nutty idea of creators loaning their characters to CBLDF for artist sketch cards. His consent was immediate. He said he was really excited to see who might draw what and in what styles.

So, without further ado: 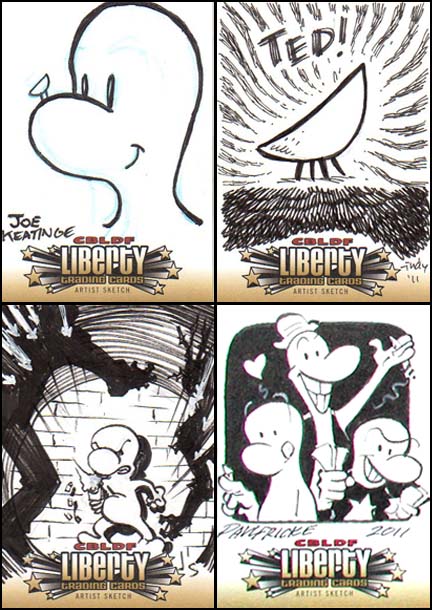 In clockwise fashion, starting from the upper left:

Ted the Bug by Indigo Kelleigh, creator of The Adventures of Ellie Connelly and the honcho of Portland, Oregon’s annual Stumptown Comics Fest

The Bone Cousins by Paul Fricke, co-creator of legendary Trollords and auteur of Bedbugs.

Finally for your amusement and anticipation, legendary CBLDF Board member, Neil Gaiman, had some fun “defacing” a whole bunch of his very own autograph cards! 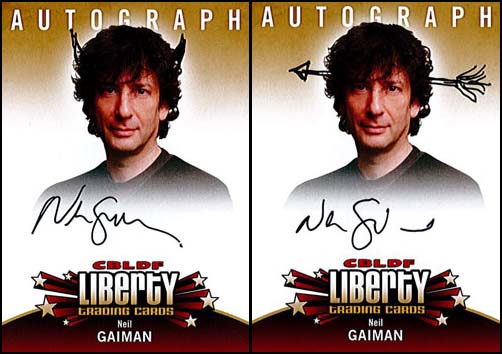