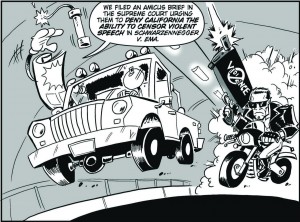 It’s a case that calls to mind the 1950s-era attacks on comic books and the censorship of the Comics Code. Does the First Amendment allow limits on the violent content in popular entertainment — in this case video games — sold to minors? Brown v. EMA (formerly Schwarzenegger v. EMA) may soon answer that question, with a final decision from the Supreme Court expected soon.

California recently enacted a law that restricted the sale of violent video games to children, citing that violence is harmful to minors. Previous decisions in the case have ruled the law unconstitutional under the First Amendment. California appealed these decisions to the Supreme Court.

Like comic books, video games are a valid form of expression that cannot be censored without actual evidence that they harm minors. The California law is dangerous in that similar restrictions could be extended to other media, including comic books, should the law be allowed to stand.

It is rarely possible to make an intelligent prediction about the probable outcome based on oral argument and this case is no exception. Although initial press reports accurately suggested the Court appeared skeptical of the California law, there also appeared to be considerable support among the Justices for preserving some role for government action. The one seeming certainty is that the final decision probably will reflect a sharply divided Court. When the Court’s decision is issued by next June, it will be critical to look for whether the holding represents a clear majority rule, and how much latitude the Court tries to preserve for government regulation of expression deemed harmful to minors.

A recent analysis of the case can be found here, or you can visit the SCOTUS blog to read the legal arguments.

← Transmetropolitan: All Around the World Makes Its Way Around The World
Larry Marder’s CBLDF Liberty Cards Diary #9 →