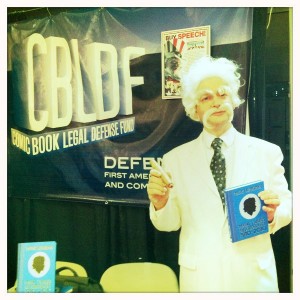 The CBLDF LIBERTY ANNUAL 2011 premiered this week, and in celebration of that, we also hosted signings with contributors Michael Bramley and Kevin Sacco. Thanks to all the creators who gave their time at our booth! 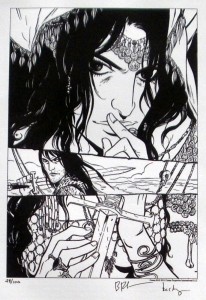 With the exciting announcement of writer Brian Wood and artist Becky Cloonan as the new creative team on Dark Horse Comics’ Conan the Barbarian, the CBLDF premiered a gorgeous letterpress print by Cloonan, signed by both Cloonan and Wood and created at Letterpress PDX in Portland, Oregon. These were limited to 100 numbered editions, and the remaining prints are now available in our online Donation Center. Get yours while they are still available!

Upstairs from the Comic Con show floor, the CBLDF tabled at the Anime Festival, speaking directly to anime and manga fans about our struggle to defend an American manga fan facing a year in Canadian prison because of manga on his laptop. Journalist and Publisher Erica Friedman gave an incredible amount of time and energy reaching out to the anime fan community, explaining how manga has been targeted on the Canadian border, and how that issue affects all fans of Japanese comics. 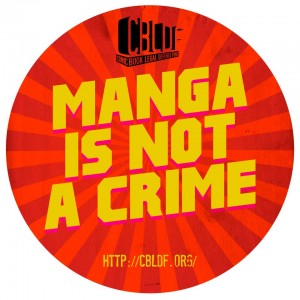 Ed Sizemore and Melinda Beasi joined Friedman in this important initiative, and we could not be more appreciative of their time and energy. An amazing array of donated manga (provided by Viz, Seven Seas, Vertical, Yen, Dark Horse, DMP, Kodansha, and ALC/Yuricon) was raffled daily, with a grand prize of a signed copy of Lychee Light Club, signed and sketched by Usamaru Furuya and donated by Vertical, being awarded Saturday night at the “CBLDF: Defending Manga” panel. Hundreds of “Manga is not a Crime” stickers were distributed, activating the passion and support of fans at the Anime Festival.

CBLDF’s two programs, “Defending Manga” and “Censorship Then & Now” both enjoyed standing room only attendance as New York’s fans came out to learn about past and present struggles to defend comics. CBLDF Executive Director Charles Brownstein chaired both presentations, covering the history of censorship from the Comics Code Authority and up to the modern day.

Thanks to the generosity of Good Fighters Kathryn and Stuart Immonen, we were able to display and raffle the gorgeous pencil art for the cover of Fear Itself #1 to new and old members. Membership does have its privileges, and this beautiful piece of art is proof of that!

Between NYCC and the accompanying Anime Festival, the CBLDF raised thousands of dollars for our current case, and left the Javitz Center with a renewed sense of purpose after speaking directly to so many fans, members, creators, and retailers who support Free Expression. Brandon X’s trial is getting closer every day, and the sense of urgency was palpable on the show floor, with people asking about the progress and expressing their support. We heard more stories of harassment at the border, many simply for having comic material, and the importance of this case brought us dozens of new members and hundreds of new donors.

None of this would have been possible without the help of our army of volunteers and interns. Huge thanks to our interns Lily and Michelle, and volunteers Alexa, Allegra, Atom, Brett, Cash, Christine, Danny, Elizabeth, Geoff, Kat, Katie, Sam, Sonia, and Rick. The hard work of these dedicated individuals keeps our fight for Free Speech in motion! Thanks also to the staff of Reed Exhibitions for their continued assistance and support.