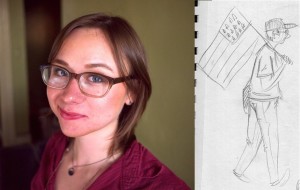 In early November, cartoonist and journalist Susie Cagle was arrested while covering the Occupy Oakland protests. Thanks to assistance from the Society of Professional Journalists, the Oakland Police Department has dropped all charges against Cagle. SPJ wrote a letter to Oakland Mayor Jean Quan and interim Police Chief Howard Jordan condemning Cagle’s arrest.

Cagle tells FishbowlLA that Oakland PD’s Public Information Officer Johnna Watson confirmed to her that the SPJ’s letter is what eventually got her charges dropped. “Not the massive amount of media I did afterwards, or my tell-all article shared hundreds of times — it had to come directly across their desk.”

The Daily Cartoonist also covered the story, relating Cagle’s frustration with dealing with the City of Oakland:

Susie tweeted her frustration that after a month of jumping through hoops and getting nowhere to have her charges dropped, it took the SPJ to get the city to drop the charges. She also noted that the District Attorney happily answered her questions when she introduced herself as press, but wouldn’t talk to her if she presented herself as an arrestee.

In their letter, the SPJ used Oakland’s own policies to point out why Cagle should not have been arrested:

Cagle’s arrest never should have occurred. It is clearly in contravention of Section 10 of OPD’s Crowd Management / Crowd Control Policy, which states, “Even after a dispersal order has been given, clearly identified media shall be permitted to carry out their professional duties in any area where arrests are being made, unless their presence would unduly interfere with the enforcement action.”

To view the full letter the SPJ wrote on behalf of Cagle, visit FishbowlLA or The Daily Cartoonist.