While CBLDF Executive Director Charles Brownstein, founder Denis Kitchen, and board member Paul Levitz are in New York City for a symposium on how the city has influenced comics, nerds in the west will be able to geek out at SLC Nerd, a one-day event taking place March 24 and featuring live music, cosplay, gaming, and more. Amidst the nerdy festivities, Night Flight Comics is sponsoring a silent auction to benefit CBLDF!

SLC Nerd starts at 2:00 p.m. on March 24 in the Rockwell Room of The Complex (536 West 100 South, Salt Lake City, UT). Come out, get your geek on, and bid on original artwork and signed comics to support CBLDF!

The official press release and schedule of events for SLC Nerd:

Salt Lake City, Utah – February 21, 2012 – Gangrene Productions (producers of the Gangrene Comedy Film Festival) present a one day Nerd-stravaganza guaranteed (guarantee not legally binding) to get your geek on.

Produced by Gangrene Productions and sponsored by Night Flight Comics, the Complex and mediaRif, SLC Nerd promises to be “one big day of fun, filled to the brim with geekery and nerdata, featuring live music, costume contests, table top gaming and more”, according to show co-producer Ben Fuller.
Set for March 24th, 2012 in the Rockwell Room at the Complex on 536 West 100 South, Salt Lake City just behind the Gateway Mall, the doors open at 2pm for open Table Top Gaming and a Magic the Gathering tournament, with Costume judging scheduled to begin at 4pm, and the live music and entertainment to start at 6pm.

The show will be Emceed by local comedian and musician Jon Clark and will include live performances by local bands the Rotten Musicians, Rev Mayhem, Baby Ghosts and Funk Toast. Also, a troupe of some of the finest local improv comedy artists will stage a completely improvised Nerd Musical under the direction of Bob Bedore of Quick Wits Comedy.

Additionally, to add to the fun, the real life local superhero team The Black Monday Society will be there to provide Superhero support, the Hello Sweetie!! Podcast will capture the event on their show, The Utah Rocket Club will display their coolest high powered model rockets, Living Adventures Live Action Role Players (L.A.R.P.) will put on a demonstration, the Nerd Writers Game Group (Dan Wells, Larry Correia, Paul Genesse and others) will do a live exhibition game of Legend of Five Rings, there will be a Magic the Gathering Tournament, and Night Flight Comics will present a silent auction of original artwork and autographed work to benefit the Comic Book Legal Defense Fund. Co-producer Craig Nybo, of Gangrene Productions/mediaRif, is excited about the show. “We love putting together events like this that are designed to be fun, low cost, and easily accessible. We want it to be fun for everyone.”

“The whole venue is looking forward to this event,“ said Paul Brucks, General Manager of the Complex. “It is a perfect example of our commitment to the local market, as well as our desire to be a multi-faceted venue that can bring a lot of different kinds of entertainment to the community.”

Live, Local, Alternative
Admission is $8 in advance from www.partytix.com or $10 at the door
All Ages Show
Doors and games open at 2pm/Costume Contest Judging starts at 4pm/Entertainment & Live Music starts at 6pm

Gangrene Productions (www.gangreneproductions.com) is the “viral” arm of mediaRif and focuses on humorous and original video, animation, music and live events production & promotion.

Night Flight Comics (www.night-flight.com) has been in business since 1987 and has two stores, one across from the Fashion Place Mall in Murray and the other in the Library Square in downtown SLC.

The Complex (www.thecomplexslc.com) is home to 4 of Salt Lake City’s newest venues, all located within a single 42,000-square-foot building. Able to host up to 4 events on the same night, at the same time.

(This schedule is subject to change and is not final – the most current schedule will be maintained on the SLC Nerd FB Fan Page – www.facebook.com/slcnerd) 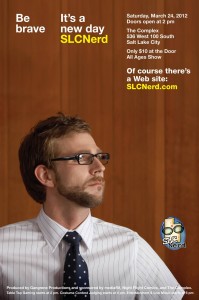 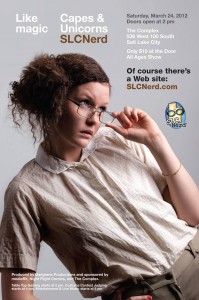