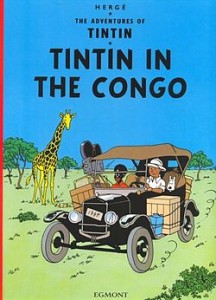 In the course of one day, a library in Sweden banned and then lifted the ban on Tintin comics. The comic series, by Belgian comic artist Georges Remi, is about the misadventures of a young reporter and his dog and is set in the early 20th century. A youth services librarian at the Kulturhuset, Stockholm, decided to pull the Tintin comics because of dated and frequently unflattering depiction of various races. Rich Johnston writes about the ban for Bleeding Cool:

Behrang Miri, in charge of the library’s youth sections, said that he’d made the decision because Tintin reflected a “caricature of a colonial perspective.” That Africans are stupid, that Arabs sit on flying carpets, that Turks smoke hookahs and the like. He announced that all children’s literature, even adult literature, stocked by the library should be reviewed in that light.

The ban was quickly dropped after public criticism of the library’s decision to remove the books. The library’s artistic director said the banning happened too swiftly and with little oversight. Furthermore, Miri apologized, saying that he just wanted to raise awareness to the potentially xenophobic content. From a September 27, Hurriyet Daily News article:

This isn’t the first time that the Tintin comics have been banned or challenged. The comic series was subjected to examination by a Belgian court because it allegedly broke several of Belgium’s laws against racism and incited racial hatred. The series was ultimately allowed to stay on the shelves because of a court rule that it was a product of its time and did not intend to incite racial hatred.

In the U.K., the book was wrapped in a plastic cover with a warning about the racially dated content, From an article by Nifel Bunyan for The Telegraph:

The Campaign for Real Education has condemned his publishers as “over the top” for deciding to package one of his early adventures, Tintin in the Congo, in shrink-wrap and with a warning about its content.

An editorial in a Vatican based newspaper reflects the argument that historically dated speech should be understood in that context, and it should not be restricted because someone might take offense. From another article for The Telegraph, by Nick Squires:

…an editorial in L’Osservatore Romano said: “It is essential to take into account the historical context to avoid entering the realm of the ridiculous,” arguing that the book by Herge, the Belgian artist whose real name was George Remi, reflected the values prevalent in Europe between the wars.

“The comic book was published in the 1930s, and for that reason expresses the values of the era – but can it really perturb young Britons of today, raised as they are on the internet, video games and fish and chips?”