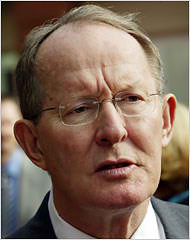 The Senate Judiciary Committee began holding hearings regarding gun violence on Wednesday. During a day of heated and frequently preposterous commentary, the most ridiculous statement came from Senator Lamar Alexander (R-KY), who told MSNBC’s Chuck Todd that violent video games are a “bigger problem” than guns are.

When Todd asked Alexander whether he would support a universal background checks bill, Alexander responded with the following:

And just in case Alexander’s statement seems too unbelievably obtuse to be true, there’s video:

Jason Linkins with the Huffington Post covered the story, writing about the frequent –and false — connection pundits make between video games and gun violence:

I was never too convinced by the argument: Video games, unlike the act of shooting up an entire school of children, were and remain popular, with… millions of people partaking in the escape. That some mass-murderers occasionally participated in that culture seems to be incidental at best — a tiny bit of statistical effluvia that should be written off as insignificant at the outset.

The Washington Post‘s Max Fisher recently looked at the statistics related to gun violence in the countries with the highest rate of violent video game usage and found that the United States was a statistical outlier in a trend that actually shows a slight decrease in gun violence as per capita video game usage increases. Further, Kotaku examined 25 years of video game research, looking at both sides of the argument in an article that ultimately supports the idea that there is a lack of scientific evidence supporting a link between violent video games and gun violence. Alexander’s claim that video games are of more concern than guns are has no scientific support (much less a basis in reality).

Alexander’s comments add to an already vocal group of people who believe that violent video games cause violent behavior. This moral panic is fueled by heated rhetoric and a lack of scientific evidence, much as the moral panic that led to the censorship of comic books in the 1950s was. In concluding his article for HuffPo, Linkins summarizes how demonizing video games doesn’t solve the problem:

But let’s not trade the pointless demonization of law-abiding gun owners for the pointless demonization of law-abiding video game enthusiasts. Gamers are not saints, and there are certainly aspects to gamer culture that disturb me. (Just ask Anita Sarkeesian.) But the simple fact of the matter is that nobody becomes more materially dangerous to society by dint of owning a Playstation. And I’d rather face down someone armed with a copy of “Call Of Duty” than someone armed with a Sig Sauer any day of the week.